On February 28, 2022, the City of Windsor held a meeting we believe was in violation of the Open Meetings Act (“OMA”), even if their attorney was present and telling them it complied with the Act.

Explanation of why the meeting was an illegal meeting and why the actions taken could be invalidated.

The Illinois Municipal Code provides for situations where there is not a quorum of the public body remaining in office. See Section 3.1-10-55, where it permits less than a quorum to meet for the express purpose of appointments to fill vacancies of municipal office holders. Please note there is no other situation found in the OMA or the Municipal Code permitting anything less than a quorum physically present at a meeting (other than the recent pandemic-related remote meetings) to pass any measure other than appointments to vacant offices:

We had previously reported that the mayor and a city alderman (his daughter) resigned from office, which left two of the five elected office seats vacant. There are three remaining officeholders on the 5-person board, which makes a quorum of the public body.

At the previous meeting (February 21, 2022 – watch it HERE), the attorney advised the board there was no quorum at the location of the meeting, rendering them unable to conduct a meeting according to the OMA. The attorney was correct during that meeting. We asked if they had a policy permitting remote attendance, which they did not produce, and instead of answering the question, the attorney cited the OMA’s requirement of having a quorum present at the location of the meeting in order to permit remote attendance (this is a different situation than the recently passed amendment permitting remote attendance during a declared emergency).

This Feb 28 meeting had the exact same issues: three remaining members of the board, with one of those members out of town and unable to attend in person, and apparently no adopted rules permitting remote attendance.

When questioned, the attorney stated the State Statute was the rule (watch this at 19:52 in the below video), and we agree, which is why this meeting violated the law – because of the state statute’s requirements of a quorum being physically present at the meeting location.

Section 2.01 of the Open Meetings Act: “Except as otherwise provided in this Act, a quorum of members of a public body must be physically present at the location of an open meeting.”

The clerk and attorney advised the residents they contacted Mr. Cole at the Illinois Municipal League who allegedly told them it was OK to hold a meeting with one of the remaining three officials remotely attending (we have serious doubts if he ever tendered such advice). They also indicated they contacted the Shelby County State’s Attorney who allegedly instructed them to follow the advice of their attorney.

“Sec. 7. Attendance by a means other than physical presence.
(a) If a quorum of the members of the public body is physically present as required by Section 2.01, a majority of the public body may allow a member of that body to attend the meeting by other means if the member is prevented from physically attending because of: (i) personal illness or disability; (ii) employment purposes or the business of the public body; or (iii) a family or other emergency. “Other means” is by video or audio conference.”

There was no quorum of the 5-member board physically present at the meeting location. The quorum requirement does not change simply because one or more members of the public body resign – it remains a 5-member board.

Open Meetings Act’s requirement of having adopted rules, prior to permitting remote attendance

“Sec. 7(c) A majority of the public body may allow a member to attend a meeting by other means only in accordance with and to the extent allowed by rules adopted by the public body. The rules must conform to the requirements and restrictions of this Section, may further limit the extent to which attendance by other means is allowed, and may provide for the giving of additional notice to the public or further facilitate public access to meetings.”

There are no apparent adopted rules of the City of Windsor permitting remote attendance of board members. 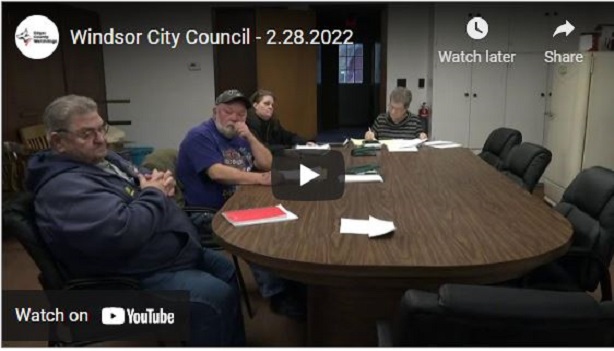