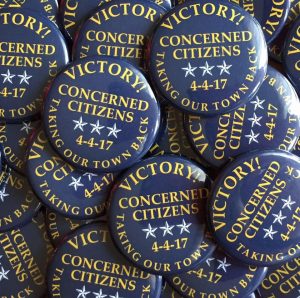 On April 4th 2017, fed-up voters in both Orland Park and Tinley Park toppled longstanding political regimes that have been embroiled in one scandal or another for the last several years.

This regime change was a direct result of citizens using the Freedom of Information Act (FOIA) to uncover and expose corruption, wasteful spending, and duplicity committed by shameful or inept public officials in these southwestern Chicago suburbs. It is proof positive that an active citizenry shining a light on what public officials are really up to can have a big impact in our state. The swamp in Illinois can indeed be drained...but everything has to start locally at the community level.

In Orland Park, Mayor Dan McLaughlin was removed from office after 24 years in power because alert citizens there became aware of financial mismanagement and the Mayor's consistent refusal to ever put an end to any of the wasteful spending or other abuses that Orland Park has become synonymous with (and infamous for) in recent years. Keith Pekau, a political newcomer, handily defeated McLaughlin despite never having run for public office before and acknowledging that the only reason he decided to run for Mayor was because he was so disgusted by the Village's recent pension scheme that would have benefitted McLaughlin. This scheme, enacted by the Village last year, would have increased McLaughlin's compensation from $40,000/year to $150,000/year while automatically increasing his state pension upon retirement from $30,000/year to more than $100,000/year.

Pekau was outraged by what many saw as a scam to drastically increase McLaughlin's salary in what was likely to be his last term in office...resulting in what was calculated to be over $2 Million in long term state pension payouts to McLaughlin under this new scheme when he likely retired before the next election. In Illinois, many public officials have been busted for pension schemes similar to this, where their salary is excessively raised shortly before they leave their positions so that their pensions are guaranteed to be dramatically increased. And once increased to the new  (and much higher!) level, those officials would receive that figure every year for the rest of their lives (with additional increases of 3% or more for inflation). Voters in Orland Park appear to have been sickened by this outrageous scheme and voted to oust McLaughlin in a landslide, thus denying him both the exorbitant new salary and pension increases.

Similarly, voters gave a resounding NO! to McLaughlin's proposal to build yet another wasteful flight-of-fancy in Orland Park, this time a spare-no-expense "outdoor multi-purpose sports facility." Orland Park has a well-earned reputation for wasting public funds on fanciful construction projects that never seem to provide any public benefit other than building something shiny and expensive that digs the Village deeper into debt. Pekau's campaign mailings accused McLaughlin of running Orland Park more than $150 Million in debt in recent years, largely through wasteful spending on opulent public projects. Pekau has promised a course correction and was supported in his election by radio commentator Dan Proft's Liberty Principles group, which is dedicated to shining a light on wasteful and corrupt practices by local government in our state. Liberty Principles got the word out in Orland Park that it was time to put an end to all of the wasteful government spending by sending mailings critical of McLaughlin to residents and running commercials on cable TV in the area to alert the community that it was time for a change.

Voters began souring on McLaughlin back in 2013 when he seemingly refused to intervene and put an end to the accessing of child pornography and other sexual crimes that were documented to have been occurring in the Orland Park Public Library. (This and other Orland Park scandals are well-documented in the book, SHUT UP!: The Bizarre War that One Public Library Waged Against the First Amendment.) Residents brought complaints to the Mayor that their public library -- another spare-no-expense construction boondoggle -- was being used as a place where perverts and predators would engage in illegal activity while library staff deliberately looked the other way. Instead of addressing this problem, Village officials at all levels (including the Police Chief) seemingly chose instead to harass whistleblowers and intimidate the public while stonewalling and refusing to clean up the library. Sadly, this is a classic pattern in our state, where public officials entrench themselves in their positions, refuse to admit they've made mistakes, and attack the public (because they think scaring critics away is the only way they can avoid responsibility for what's gone wrong). McLaughlin was presented with an opportunity to be a true leader and make the Orland Park Public Library a safer place for children and families but he chose to do nothing and allowed the problems there to fester.

In recent months, other spending abuses have come to light in Orland Park because of FOIA requests made for public employees' expense accounts, including Development Director Karie Friling being caught using public funds to eat lobster, steak, and shrimp cocktail at the opulent Venetian Hotel in Las Vegas and violate the Village's spending per diem limit...seemingly without ever receiving any sort of disciplinary action for doing that or being made to pay back taxpayers for what she was not authorized to be spending. When voters see that a Mayor like Dan McLaughlin allows Village employees like Friling to waste money so frivolously (on lobster dinners!) without any consequence, they clearly leap at the opportunity to put someone like Keith Pekau in office instead, as he's promised to end such wasteful practices.

Similarly, in nearby Tinley Park, voters enthusiastically swept away the current regime, booting Mayor David Seaman, Clerk Patrick Rea, Trustee Kevin Suggs, and others from office and replacing them with members of a group of concerned citizens who have loudly criticized village mismanagement for the last year.

Seaman and Rea behaved badly during open public meetings when they were confronted with findings citizens made using FOIA requests that showed Tinley Park officials were lying to the public about what exactly went on in shady dealings between former Planning Director Amy Connolly and the Buckeye Community Hope Foundation. Connolly abruptly left her position shortly after her email correspondence with Buckeye was exposed, revealing what many saw as collusion between Connolly and Buckeye to inappropriately alter existing Village code so that Buckeye's scheme to construct a low-income housing project (in violation of existing planning codes) could slip through largely unnoticed by the public. A massive scandal unfolded after these and other revelations that resulted in the entire Planning Commission resigning like rats fleeing a sinking ship, Trustee Bernie Brady giving up his seat, the Assistant Village Manager suddenly resigning, and two other poorly-behaved Trustees (Brian Maher and T.J. Grady) opting not to run for re-election this year. Several lawsuits are still ongoing related to Connolly/Buckeye and the large mess that Seaman and others created by not intervening and putting a stop to whatever was going-on in the Village's Planning Department.

The defeat of Seaman and Rea and the rest of their slate of candidates on April 4th is a resounding rebuke for local government in Tinley Park. Freelance reporter Megan Fox covered the Connolly/Buckeye scandal as it unfolded, with her multi-part video documentary capturing the contempt that the sitting Village board showed towards a concerned citizenry that demanded explanations for all of the shady dealings that kept being uncovered in FOIA production. Local citizen sleuth Michael Glotz -- a construction worker by trade -- earned himself the nickname "The Excavator" by using the Freedom of Information Act to dig deeper and deeper into the corruption in Tinley Park and expose everything that Connolly, Buckeye, Seaman, Rea, and others had done. Month after month, Glotz attended Village board meetings and hammered the Mayor and Trustees with his latest findings from FOIA production. Famously, disgraced Trustee T.J. Grady was so upset with Glotz for digging up embarrassing or contradictory emails that public officials sent one another that he called Glotz "a dick" under his breath during one board meeting (which was caught on video).

One year later, Michael Glotz now holds T.J. Grady's seat on the Board of Trustees, as of the April 4th election. A member of the public who used the Freedom of Information Act to dig into all of the shady and dirty dealings the local government was involved in now holds the seat of the pompous and arrogant Trustee who once sat on a stage, looked down upon him with contempt, and called him "a dick."

That shameful Trustee is now removed from power and in his place is the concerned citizen who knew his rights, became skilled in utilizing FOIAs to uncover corruption, and attended board meetings to express his opinions and question public officials who were either behaving badly or breaking the law. April 4th was a wonderful, wonderful election day in southwestern Chicago.

These resounding regime changes in both Orland Park and Tinley Park would never have been possible if not for the Freedom of Information Act and concerned citizens who know how to FOIA their corrupt governments. This is a lesson for other communities across our state who have been plagued with terrible officials like Dan McLaughlin, David Seaman, Patrick Rea, Brian Maher, and T.J. Grady. These people are not royalty and they are not our betters. People like this do not have to remain in positions of power forever. They can indeed be defeated and real change can come to Illinois at large if members of the public shine a light on wrongdoing and take too action like Michael "The Excavator" Glotz and others have done.

You can do this too wherever you live.