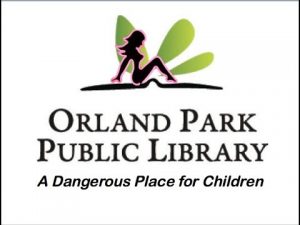 This official OPPL incident report (obtained via the Freedom of Information Act) made a point of identifying the race of the man involved as being black. Orland Park is an affluent suburb of Chicago that is approximately 96% white.

Library Director Mary Weimar (who is herself white) chose to contact the Orland Park Police about this black man in her library on the morning of February 10th and no less than 3 patrolmen were promptly dispatched to the OPPL. Apparently, the black man had returned to the OPPL a second day in a row. According to the report, Responding Officer Hartstock (Badge #724) and the two other policemen spoke with the unidentified black male for an unspecified length of time but took no action against him.

Contrast this episode with how Mary Weimar behaved 6 years ago, when in March 2011 an adult white male was observed by three witnesses accessing child pornography on the OPPL’s computers. In that instance (which is detailed fully in Chapter 12 of the book, SHUT UP!: The Bizarre War that One Public Library Waged Against the First Amendment), Weimar and fellow OPPL staff chose not to call the police and they allowed the man to return and access computers again, despite his being identified by three witnesses as someone who was looking at child pornography in their Library (which is an obvious federal crime). But here in February 2017, a black man allegedly “watching” three high schoolers and leaving them a note prompted Weimar to call for the police to come to the Library (when this man’s alleged behavior was not obviously criminal in any way). Did the race of the subject involved factor into Weimar’s decision-making here? Or is this an indication that Weimar has possibly learned from her egregious past mistakes and now calls the police if there’s even a question that something bad could be happening in her Library?

It’s clear that Mary Weimar and the other OPPL staffers made a horrific and stomach-turning decision to knowingly allow that man in 2011 to get away with accessing child pornography on public computers. For many years, Weimar and the OPPL Board of Trustees refused to acknowledge that they were wrong to have chosen not to call the police when they should have. Since a grown man has no business hanging out in a public building “watching” three high school girls and leaving them notes, it seems appropriate that the OPPL would contact the police and let them know about this individual. Other incident reports written by OPPL staffers through the years detailed episodes where young women were stalked and sexually harassed by men in this Library. It would appear that the OPPL staff are now taking appropriate action when informed that something creepy could possibly be going-on in their building (at least in instances where the creepy person happens to be black).

This change at the OPPL would likely have never happened if the public had not actively scrutinized and criticized the OPPL staff’s behavior through the years. Mary Weimar was transformed from a director who knowingly looked the other way when crimes against children were being committed in her building to someone who phones the police and asks them to intervene when something even remotely suspicious is happening. That sort of progress would have never happened on its own. It took public interest in the goings-on at that Library and loud public condemnation of poor judgement and mismanagement in the past for a public employee like Weimar to make such a 180-degree change in behavior.

It remains to be seen if all situations involving inappropriate conduct are handled properly at the Orland Park Public Library going-forward or if this February 9th episode was just a fluke dependent on the race of the subject involved. But it seems clear that calling the police and having them weigh-in on and speak with parties involved in anything remotely sexual happening in a public building is always the right move. If the police determine that no further action is warranted, it was still smarter to let them be the judge of that than deciding (as Mary Weimar had done in the past) to look the other way, ignore a problem, and pretend it was not happening in the library.