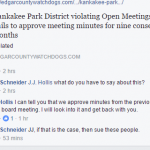 After our article exposing the fact that the Kankakee Valley Park District (KVPD) had not approved any of their meeting minutes since April of 2016 – more than 9 months ago, Park Commissioner J.J. Hollis took to a Facebook group page to exclaim that “we approve minutes from the previous month at every meeting” and further stated he would look into it and get back with the readers.

After reading that comment, just for further verification, I asked the Executive Director when those minutes would be available, and she kept replying that they had to be transcribed, placed on an agenda for approval, and then I could get copies of them. I don’t know about you, but the statements from the park director sure points to meeting minutes that have never been typed up and never approved at a meeting – contrary to what Mr. J.J. Hollis stated.

Additionally, I messaged Mr. Hollis and asked him to please correct, or state the actual truth, to the meeting minutes never being approved, and he responded that he already answered that question. I messaged him a second time and explained that his comment was misleading and it led people to believe the minutes had been approved, and that I could email him what the executive director sent me, and that he could call me on the phone if he wanted to.

This is an important issue because we are left with what we believe to be a park district commissioner knowingly passing false information to the public – or an executive director passing false information to me as answers to FOIA requests. Since we did receive the director’s answers as a result of a FOIA request and written responses to subsequent questions related to the FOIA request, we must take them as factual evidence the minutes were never approved.

Another poster, Bob Schneider, told Mr. Hollis to sue us if what he said was true (approving minutes at every meeting) – which will never happen because the truth is in the previous article; that no park district meeting minutes have ever been approved since April of 2016.

The sad truth is that it appears we have another public official who either doesn’t know what he did at meetings or cannot seem to tell the public the truth, and apparently thinks it’s OK to leave them with the impression our reporting was inaccurate.

We wonder how long it takes to “look into it and get back with us” – especially since it takes no more than a phone call or email to his executive director. Didn’t take us very long…

Below is the email exchange which clearing states, multiple times, that those meeting minutes haven’t even been typed up for approval, let alone actually approved at a public meeting.

What are they trying to hide? What’s wrong with a “Hey, they are correct, no minutes have been approved for almost 10 months and we will fix it” – that would show a genuine concern for the situation at hand.