How long has it been . . . 1 year? 2 years ? since Yargus resigned as park district attorney - and Charity Murphy, the Clark County Park District Executive Director, cannot seem to update the FOIA Officer information on the park district's website.

On top of 2 failed State Fire Marshall inspections in as many years, numerous FOIA violations, and now the wrong FOIA contact information on the park district website.

Time for another pay raise ! 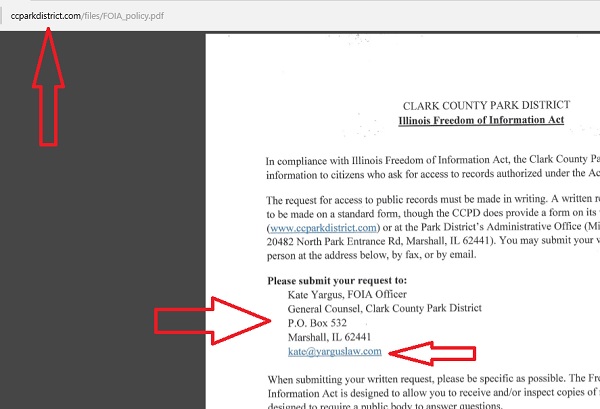 Commissioner Terry Stepp will probably opine that since the park district and campsites were not at capacity, that this issue is moot. Or, maybe they are trying to keep other FOIA requesters from submitting electronic FOIA requests?

Commissioner Ron Stone might say this is harassment and vote, along with Glenn Keuhnel and Joe Ewing, to have us investigated for harassing and bullying the district.

Your guess is as good as ours on this one, there doesn't appear to be a reason for such an outdated website.

So when I went looking for their FOIA Policy, I was directed to the other page with the policy on it, which is clearly outdated.

Are they purposely trying to avoid providing too much information to the public for fear they will start to become involved in the affairs of the district? Is the Director purposely planning on driving away its customers so she can blame it on the "harassment and bullying" - because there is absolutely no useful information on the new website except the phone number.

We have seen this numerous times in the past several years, where when a public body starts receiving criticism, they completely dismantle their websites and basically make them unusable. Look at the City of Cahokia, the mayor took their website completely off-line last October claiming it was being "reworked" and will be back online "shortly", and seven months later there is still no website for the City of Cahokia.