On page 2 of Mark Isaf’s opinion, he talks about the county board authorizing payment of $43,000 worth of bills incurred by the ambulance service in the month of September, 2003 and that the county made him restore those funds, this happened in Nov 2003. Just prior to that he states that cash on hand is typically considered an asset of a business being purchased.

That is never typical, especially when the cash on hand is in a government account and was obtained through a special tax levy to be set aside for purposes stated in the levy.

So the net affect of what he believes actually happened was Burgin was given, free and clear, assets of the people of Edgar County, because the board deamed it too expensive to operate. Never-mind they kept siphoning money from that account,  $51,791.63 just in 2003 calling it an “administration fee”, and with Burgin in charge it was apparently run into the ground – or made to look that way. Regardless, Burgin, as an employee of the county, could never have legally “purchased” this asset. It was a setup by Burgin and the county board to happen this way and to screw the people of Edgar County out of the ambulance service.

One question nobody has asked yet, is: “By what authority is the Edgar County Board forcefully [with]holding assets of a private company?” , if the story of this $100,000 is TRULY the case!

One thing we have recently learned through this process is that, in general, Auditors Notes are inserted into an audit at the direction of someone from the public body being audited. The question now is who directed the auditor to insert that note? Jim Keller (likely)? Jeff Pointer (likely)? the Treasurer (unlikely)? Mark Isaf (unlikely since it wouldn’t match his opinion)? Did Burgin, who once said he had enough dirt on these people to put them all in prison, coerce someone to cause this to be inserted into the audit? Could that be why he is still on the 911 board? All we know is that someone did, and once the Attorney General rules in our favor on the FOIA complaint, we should be able to nail it down.

The original Purchase Agreement effective October 1, 2003 DID NOT mention the bank account, or the $100,000 as an asset of the Ambulance Service. It was and still is an asset of Edgar County. Specifically the people’s tax money collected for expenses in providing ambulance service, which the county no longer has.  At what point is the county obligated to return the tax money they are not turning over to the Ambulance?

The original Service Agreement dated effective October 1, 2003 made no mention of paying any money to the county – and it shouldn’t have since that was taken care of in the Purchase Agreement.

The second Service Agreement effective September 1, 2005 did make mention of repayment of $40,000 at $800 per month with zero interest to bring the (County owned) account back up to $100,000. This stemmed from a $43,000 claim that by all indications should be considered theft of public funds and submitting of a false claim.

The claim submitted states it was approved by the Edgar County Board on February 18, 2004, but no record of, or mention of, this approval is found in the county board minutes nor does that figure appear on the list of claims for that month. This second service agreement indicates that the county board finally noticed the missing $43,000 – a full 18 months after the transaction occured.

Even more disturbing is Mark Isaf’s claim that Burgin restored the account to $100,000.00 by accessing his credit line and even states that on November 30th of 2003 the balance in the account was $101,261.00 because of that credit line.

That claim is a total fabrication!

The only ways Mark Isaf could come to that conclusion is he was lied to or he is involved in the cover up.  Why?  Because he reports that the account was at $61,459.00 at the end of October 2003 and Burgin accessed his credit line to bring the account back to $100,00.00.  That implies Burgin made up $39,802.00 and the math doesn’t work with the paper trail of facts.  In fact, the opinion written by Isaf has more holes in it than Swiss cheese.

Someone is lying, Big Time!

How does this quote from the County Treasurer on June 25th of 2012 grab you?

“Bottom line, I have no idea or paperwork to explain this amount”

The county treasurer in 2003, receives over $11,000.00 and has no idea or paperwork to explain the amount, and nobody asked what it was for?

The second service agreement also reduced the number of fully staffed ambulances from 3 to 2, effectively paying the same amount of money for 66% of the service provided. What a deal (for Burgin)! Get caught with your hand in the cookie jar, then get to reduce your staff and ambulances by 1/3, and still rape the county taxpayers the same amount as the previous agreement.

There you have it – the State’s Attorney, through his opinion, and all but one of the former county board members want you to believe that they sold the ambulance service to Burgin for $100,000 – but part of the sale was a bank account with $100,000 in it (even though there is no DOCUMENTED proof it happened this way)! Wow! We should all get this lucky! All of the legally binding, documented proof, points to an entirely different scenario!

By the way, the statute of limitations on the purchase contract does not expire until September 30, 2013…yeah, that’s right, 10 years!

There should be a public outcry to force Mark Isaf to take legal action to recover the Contracted Purchase Price of $100,000 and take direct action against each and every person that lied to him during his inquiry into this scam, assuming he is not covering for them ! 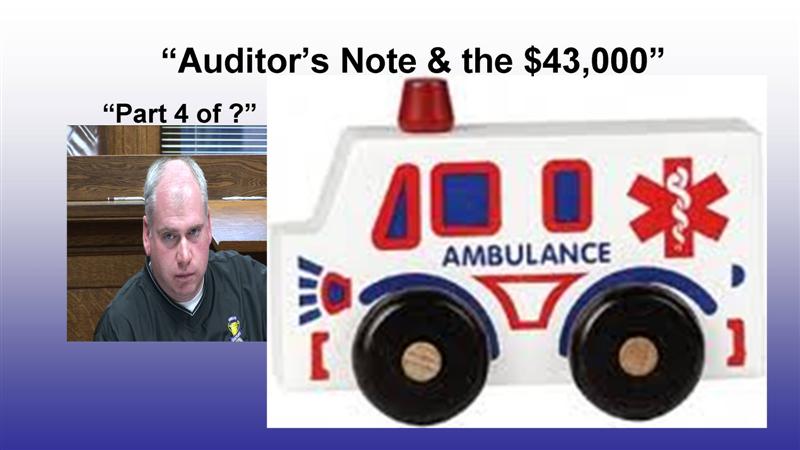