Is It All About The Beaver?

I have come to the conclusion that either the people in charge can’t read, or they can’t comprehend what they read, assuming they have read anything.  The more we dig the more we uncover and to date not a single person has been held accountable to the law, yet they continue to give RSB Aviation a hard time. I’ll talk about the beaver later in this article…

The tide may be turning!

(720 ILCS 5/33-3) (from Ch. 38, par. 33-3)
Sec. 33-3. Official Misconduct.) A public officer or employee or special government agent commits misconduct when, in his official capacity or capacity as a special government agent, he commits any of the following acts:
(a) Intentionally or recklessly fails to perform any mandatory duty as required by law; or(b) Knowingly performs an act which he knows he is forbidden by law to perform; or (c) With intent to obtain a personal advantage for himself or another, he performs an act in excess of his lawful authority; or(d) Solicits or knowingly accepts for the performance of any act a fee or reward which he knows is not authorized by law.

I emphasized item B and C as I believe when everything is laid out, most will agree that those two sections of the Criminal Official Misconduct statute do in fact apply.

During the December County Board Meeting, it was publicly exposed that Jimmy Wells was storing his own personal property in a public hanger owned by the Edgar County Airport, of which he was not paying rent, and we know he has been storing it rent free for at least the past 5 Years! The sad excuse and attempt to justify such storage can be viewed at about the 40 minute mark in this story.

In approximately 1 week, Jimmy Wells, the Airport Manager, removed his personal property from storage in the hanger in question.  I covered that in this article.   This is where it gets interesting!  If Chris Patrick felt it was justified with his excuse provided then why was the property removed?

Has Jimmy Wells now violated Article VIII section 1a of the Illinois Constitution in his efforts to remove his property from the hanger?

(a) Public funds, property or credit shall be used only for public purposes.

According to our investigation, we have witness’s that confirmed Robert Hault assisted Jimmy wells on December 10th, 2012 all morning and until approximately 2:30pm moving Jimmy’s personal tools/material/parts from the main hanger, where they were stored, in what appears to be a clear violation of the law.  Why is that significant?

Significant because it is not the obligation of the tax payers of Edgar County to cover the cost for Jimmy Wells to remove his personal property that was being stored in violation of the law.

According to the Pay Period Ending 12/21/2012, Robert Hault turned in a time card to receive pay for working on the 10th of December from 7:45am -7:00pm, and Jimmy Wells signed the time card as Supervisor, which I assume is a requirement for all time cards.

The removal of Jimmy Wells’ personal property from the hanger is not public business. If public funds were used to pay Robert Hault during the time in question, it’s clear a violation of the Illinois Constitution has been committed, and that action is considered Official Misconduct according to the Illinois Supreme Court, and it would constitute a class 3 felony.

More importantly, why should We The People pay Jimmy Wells for December 10th of 2012 when he clearly used that time while at work to do his own personal moving of his own personal property out of a hanger that he had no business storing it in?  I think a first year law student could make an argument of misconduct on that one.

Knowing that County Board Chairman Chris Patrick justified the storing of personal property in the hanger, the question is why remove it?  I suspect it was removed because anyone with any common sense knows you can’t charge a person for hanger rent (RSB Aviation), and then use part of that same space for your own property on the back of the lease holder.  Nor can you you sit in a position of control and make decisions that provide a personal advantage for yourself.  Both of those actions may very well be Official Misconduct!

This entire Airport scandal was brought to the surface after a claim that Breastfeeding was not allowed at the airport.  We know that the subject was discussed, and I am sure more will bear out on that issue, but after extensive digging it’s clear there is an agenda or multiple agendas to remove RSB aviation, and after the clear paper trail of attempting to force him out I suspect the breastfeeding was the ONLY thing they could come up with as an excuse.  Boy did that ever back fire!

Considering the facts exposed here and those in this article, the rest of this information is going to be very enlightening on the subject of truth.

Starting from the beginning, I believe it is safe to say Chris Patrick and Jimmy Wells, as the Airport Chairman and Airport Manager, have clearly not followed the guidelines outlined by the FAA under the Federal Grant Assurances stipulations.  Specifically those found in Chapter 12, Review of Aeronautical Lease Agreements.

Even with the most basic understanding of the English language we can determine that the rules established for Lease Agreements  by the FAA clearly are not in line with the lease issued to RSB Aviation, who is a Fixed Base Operator.  Such non compliance with the established requirements could cause forfeiture of grant funds costing the county thousands.  Considering the FAA does permit the sponsoring entity to correct the problem, I suspect it is going to get corrected rather quickly since it’s now under investigation!

We now know that Illinois Department of Transportation, Aeronautical Division Director, DR. Susan Shea, is involved and that Alan Mlacnik, P.E. Section Chief, Aviation Systems and Programs Acting Section Chief, Design IDOT Division of Aeronautics Bureau of Airport Engineering, is heading up the initial investigation, at the request of the FAA regarding the circumstance surrounding the termination of the RSB Aviation lease with Edgar County and other presumed activities pertaining to grant assurances.

Considering key requirements such as a Nondiscrimination Provision is no where in the lease issued by the county. it would be logical that the FAA is going to instruct the county to correct the violations they find. Failure to do so will only cost the county more money.

It is clear Jimmy used one clause in the lease that it could be terminated without cause, and that question is before the FAA right now.  No logical business lease would contain such language and I am confident the FAA is going to advise that such a stipulation is outside the guidelines.  If that is the case, the County is going to have to come up with justifiable reasons to remove RSB Aviation, which I don’t think they have a leg to stand on, but that’s just my opinion.

Looking at the paper trail dating back to June of 2012, it’s clear someone has an agenda to remove RSB and each time they get proven wrong they find some other excuses.

The most disturbing element of this paper trail is the first page from Dr. Shea that requests the violations that “caused your board to terminate the lease”.  Who advised her that the “BOARD” terminated the lease?  There was no such board action!  Is this another failure to tell the truth by Mr. Patrick?

So, Chris Patrick sends 13 pages to the state as the justification documents for the termination of the lease.  Interesting that a couple VERY IMPORTANT pages were missing from that correspondence.  Were they concealed on purpose?  I believe had they been provided it would have thrown a wrench in their arguments and I suspect it is now going to bite them on the back side.

These documents make it very clear an attorney sent a letter requesting very specific information to Mr. Wells, and this letter DID NOT appear in any of the documents Chris Patrick sent to the state so they could investigate.

Nor did Jimmy Wells letter in response to the Attorney’s letter appear in that packet. Interestingly, Jimmy Wells letter failed to answer very key questions from the attorney.  Even more interesting is Jimmy Wells’ letter of August 2nd fails to include reference of his letter dated July 5th found here that requested insurance paperwork as well.  Note that the July 5th letter is not signed, nor has RSB ever received that letter according to Rusty Bogue!

Were those records concealed from an investigating agency?  Did you know anyone who knowingly and without lawful authority conceals public records commits a class 4 felony?  County policy requires full cooperation in any investigation, and not revealing these letters appears to hardly be full cooperation!

Under 720 ILCS 5/32-8. Tampering with public records. A person who knowingly and without lawful authority alters, destroys, defaces, removes or conceals any public record commits a Class 4 felony. (Source: Public Act 77-2638)

Interesting in the packet of documents Chris Patrick provided to the state is page 6 and 10.  Dimond Brothers may be selling insurance to the county, but it does not have any authority to acquire confidential competitive insurance from all of the businesses leasing space with the county or the airport.

Why hasn’t this same type of demands been placed on all the other lease holders and even the farmers who are leasing airport property?

In any event, Rusty’s lease agreement does not require insurance, nor is he under any obligation to provide all of his private insurance information to an outside party with no standing (such as Dimond Brothers).  I believe the State’s Attorney even advised the County Board during a meeting several months ago that you can’t require something that’s not on the lease.  It would have to be addressed at the renewal of the lease.  We will research past videos to see if we have that on tape.

According to Robert Bogue, who confirmed with Rita Goodman of Dimond Brothers, there are absolutely no dollar requirements for insurance coverage specified by either the county, airport, by Dimond Brothers or their insurance underwriters.  If that is the case, then why was such a focus put on RSB Aviation?  What is the real agenda?

We know that Chris Patrick and Jimmy Wells have refused to disclose the reason for the termination notice, but it’s clear as time passes, more and more information percolates to the surface casting serious concerns on the handling of this whole operation.

Is this whole issue about the need of that hanger for Mr. Patrick’s soon to be completed De Havilland Beaver, that word has it, will not fit in any of the other hangers because of its wing span?  Is it about setting up another Ag spraying operation that happens to be operated by a person working on a particular County Officials airplane in Indiana?

For now, RSB Aviation is still operating his business at the Airport just as we have predicted.  I am confident that as the facts continue to be presented to those without a special interest, it will all be worked out and a thriving business in Edgar County will continue to be a key asset to the county.

We will continue to dig and expose as the whole truth has yet to be exposed. 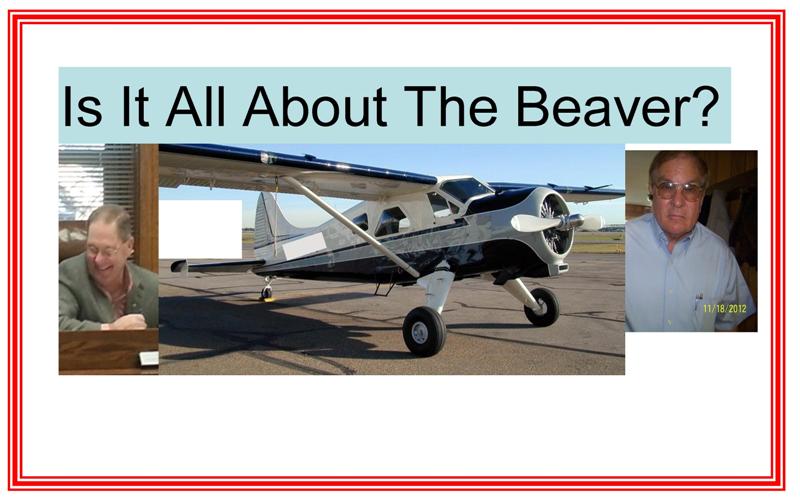