You’re In Charge! What would you do?

If you were in charge of an 8 member board, and in some cases a thirteen member board that is in charge of the people’s money collected from every phone line they have, including cell phones, would you vote to allow your one employee to spend petty cash with no need to keep receipts?

Our guess would be no as that is hardly being accountable to the people.  What is interesting with this particular issue is the fact that the 911 Board FOI (freedom of information) officer has reported that they do not have ANY receipts prior to 2004 yet thousands have been spent via petty cash.  See that story here: https://edgarcountywatchdogs.com/2011/09/911-another-shocking-revelation/

Even more interesting is the fact that a complete review of ALL the minutes from the 911 Board do not reflect a single mention of any approval to spend petty cash with no need to keep receipts.

Considering this document is signed by the only employee the 911 board has, as well as the Chairman of the 911 Board, maybe they can explain where this approval came from as it’s not in the minutes!

The document below is an example of what is on the record for numerous petty cash expenditures.  It is a piece of paper with hand written information and considering there are no receipts for them one must ask, would the IRS accept this type of documentation for expenditures?  Anyone in business knows the answer, NO!

I also wonder where in the statute pertaining to authorized expenditures does it mention that it’s the people’s responsibility to take care of buying the one employee coffee and soda throughout the year?

At the request of Nanette Crippes the second document has been included.  This document reflects petty cash for “compensation”, however,we have minutes and transaction history from the county treasure that reports it as Christmas gifts and /or gift cards.  Note that there are no receipts for this $4,600.00 either, which is the whole point of exposing this information.

It’s clear from the record that beginning in 1999 the ETSB began buying gifts for county employees and even an employee for a fire district.

The most interesting part of this is the fact that when this started a board member questioned the legality of spending money for this purpose.  The record reflects that the Chairman of the Board, Merle Clark, “advised that others do it and receive much by the way of positive feedback from the dispatchers”

Note that such a reply does not address the question raised by the board member.

What is interesting?  Eleven straight years of gifts and in 2010, a year with a new sheriff, we can find no record of any gifts being given. 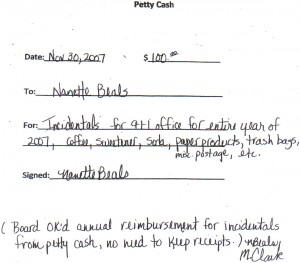 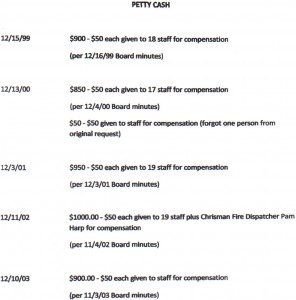