This morning we live streamed the Calumet City Mayor Thaddeus Jones’ press conference on the recent forensic audit (rescheduled from last Friday) from inside city hall.

We asked Calumet City Clerk Nyota Figgs for an on-camera interview twice – once on the telephone over this past weekend, and once via text message during the press conference. She did not respond.

WGN did speak to the Clerk, and subsequently reported some allegedly false information, and then removed their article.

On arrival to city hall, we were given a press packet with all the reports (Petty Cash, Document Destruction, and Parking Tickets), a copy of the Executive Order, and a summary sheet. (Updated with the correct documents – 12-21-2021)

One thing that stuck out to us, was the selling of scrap metal, using city vehicles, on city time, and the cash not being deposited into the city’s bank accounts. The city obtained confessions from employees just prior to them resigning from their employment. We remember scrap metal selling with Northern Illinois University’s “coffee fund” criminal scandal which resulted in guilty pleas, and a lightning-fast change in state law after our reporting of it.

Allegations of the purchasing of auto parts using city accounts, and then selling those parts for personal gain were also met with a confession just prior to a resignation. The estimated loss for this was approximated at $400,000 – based on the reported overage of budgeted expenditures for that line item.

Audits routinely look at compliance with local records laws, and this one is no different. Allegations leveled in this report indicate destruction of city records without the proper Records Destruction Certificate from the Local Records Commission and doing so in the midst of a forensic audit. The Clerk indicated to us the mayor instructed her to destroy them, but she has provided no supporting documentation to support her statement.

Allegations of the Clerk cutting down the security camera pointed at the cash vault, the day after it was installed, and proof is on video. The Clerk stated she cut it down because it was an invasion of her privacy, and she did not authorize its installation.

Allegations of improper real estate transfer stamps, and improper filing of real estate liens for nonpayment of bills due the city and failing to properly remove liens when payment is made.

There were other allegations of approximately 3000 parking tickets unprocessed, with an estimated loss to the city of over $1 million (some can be blamed on short staffing due to COVID) which may be tied to a federal grant; cash, checks, and money orders not being deposited according to state law (within 7 days); and items in a credit card machine not deposited into a city bank account. 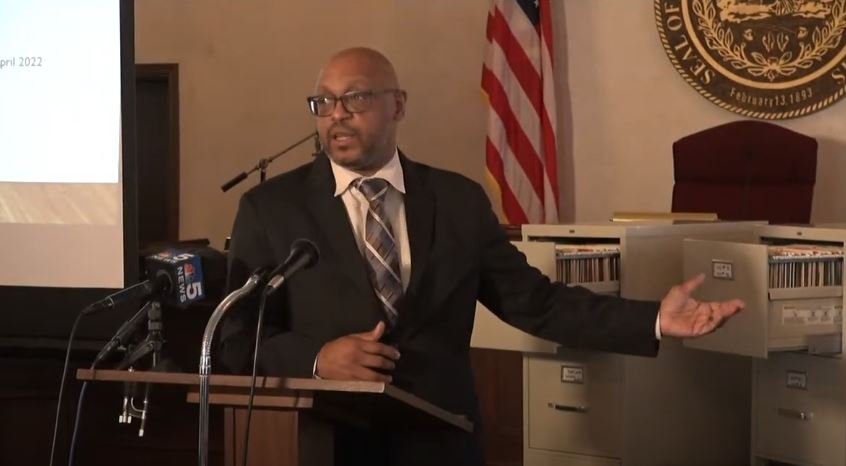