Board Chairman Myers sat down with us to discuss the airport, and that video interview is at the bottom of this article.

Early in 2018, we received a tip about issues at the airport.

This tip led us to unqualified commissioners and real estate not being properly taxed – with what we now know as the minority of landowners financing all of the airport authority taxing liabilities.

According to Board Chairman Myers, this will reduce the tax liabilities of the current 2020 property owners by as much as 30% moving forwards. The Airport Authority tax rate in 2015 was 0.11031. It has decreased over the last 5 years and currently stands at 0.10118 for 2020.

Chairman Myers said these changes take place as of the date of the petition’s filing, so existing taxpayers won’t see the full benefit until 2022 payable in 2023.

Here is the process we used once we took on this project:

The following Commissioners were disqualified based on other positions held and address of residence:

(70 ILCS 5/5) (from Ch. 15 1/2, par. 68.5)
Sec. 5. Qualifications of commissioners and removal from office. No person shall be appointed to the Board of Commissioners of any Airport Authority who has any financial interest in the establishment or continued existence thereof or who is a member of the governing body or an officer or employee of a municipality, a county, or any other unit of local government,

“[commissioners] must reside within the territory of the authority”(70 ILCS 5/3.1(d))

“each commissioner shall reside within the Authority and shall continue to reside therein during his term of office” (70 ILCS 5/3.4)

We sent the chief legal officer of the Illinois Department of Transportation, Division of Aeronautics, a notice that they should exercise their statutory duty and demand the airport authority hold a hearing where each of the four disqualified commissioners would have to show cause why they should not be removed from office. The statutory presumption being that they are removed from office for disqualification.

In July of 2018, a criminal complaint was filed against the Alderman of Danville, who was also an airport commissioner, because the Public Officer Prohibited Activities Act considers an appointment of a member of the board of a municipality, by the Mayor, to any other position, as a Class 4 felony.

Further research indicated 2 of the 5 commissioners did not live within the boundaries of the airport authority and were disqualified based on that alone – even if they were otherwise qualified.

We also noticed through researching real estate taxes, some properties were not taxed by the authority, while others were.

After several Freedom of Information Act requests to the airport authority and the Vermilion County Supervisor of Assessments, we noticed a strange and unresolved issue with the taxation scheme, which started in 1947 and continued until September of 2021 – almost 75 years.

We asked the airport authority board to correct the improper taxation.  That board did a minimal review and then basically ignored the matter, leaving approximately 30% of the taxpaying properties in the district carrying the freight for the entire district.  Current Chairman Myers and new board members addressed the issue and took further action about a year ago, which took until last month to finally bring the approximately 7000 parcels of taxable property back into the boundaries of the airport authority.

In the originally establish airport authority, nine townships within Vermilion County voted on a referendum, which passed with more than 50% of the vote, and those townships were included within the boundaries of the authority.

After the airport authority came into official existence (in 1945), local farmers filed suit to have their farm ground excluded (in 1947).

As it turns out, only about 31% of the real estate parcels (landmass) were actually paying real estate taxes to the airport authority – leaving almost 70% not paying taxes, based on the 1947 Circuit Court decision, and 73+ years of lack of monitoring by the Tax Assessors and Airport Authority.

The 1947 Court decision, granted farmland disconnection from the airport authority on the condition that the parcels remaining were at least 20 acres in size, kept the authority boundaries contiguous within the authority, and were devoted exclusively to farming operations. The statute was also updated just prior to that decision, which essentially invalidate the decision – but apparently, nobody caught it.

The Supervisor of Assessments did most of the parcel research work since it was stored electronically, and developed a map and listing of those properties that should be brought back into the boundaries of the authority.

While we will never know a hard number of the lost revenue over the last 73+ years this tax issue went on, a 36.5-year estimate puts that figure over $6,000,000.00 dollars in lost revenue from an estimated $7.3 Billion dollars in assessed property values ($202 million each year).

The current Chairman of the airport authority board sat down with us to discuss the airport and the taxation issue and we are pleased to be able to say Mr. Myers is the type of local government official every unit of government needs on their board.  From day one he recognized the truth of the matter and did the right thing.  I specifically asked him why he did what he did in this process and his response was a welcomed breath of fresh air.  The entire interview can be viewed below.  My question and his response can be found at the 19:28 mark of the video. 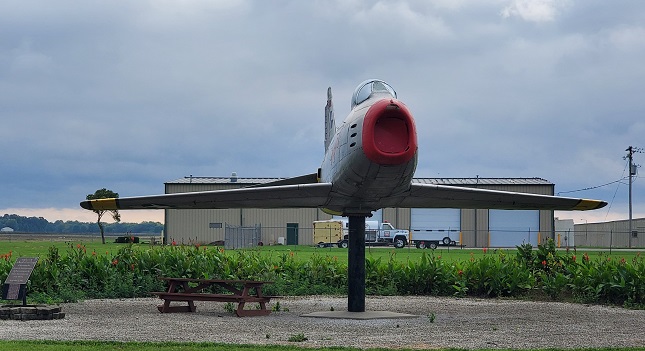