Assumption Mayor Resigns - No Time To List The Reasons

Mayor Roger Cox submitted his resignation letter last night at the end of the meeting along with a drawn-out verbal rambling to include explaining he was no longer able to do the people's business due to prior personal matters with board members, taking his focus away from his duties. While we are sure he has numerous reasons, he did disclose he is getting married next week and the local understanding is he will be moving out of town, which would make him disqualified to serve as Mayor. 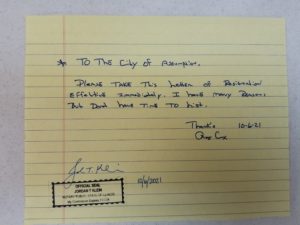 The agenda for the meeting reflected he was going to appoint an alderman to a vacancy created on September 11, 2021.  There was no publication or notice to the public that there was a vacancy to be filled, which is not a requirement, but commonly done to keep the community informed.

During the meeting, several people expressed their interest in that position along with their concerns the public was not made aware of the vacancy. While the Mayor made numerous excuses as to why other candidates were not going to be considered, prior to turning in his own resignation letter, he provided the resignation letter from the alderwoman. So while in one breath the Mayor says the public should have known, the actual resignation letter was not even presented to the board until the very day the Mayor selected the replacement.

We attended because we had been informed he had cleared out his office and was going to resign.  At the 43:44 mark of the video, I asked the Mayor if this particular appointment was a lame-duck appointment. Lame-duck appointments do little to bring unity to a board and typically create more division in a community, especially when the public was not informed of the vacancy and numerous people showed an interest.  The Mayor informed me it was none of my business.

The Board vote for the appointment of Kandy Smith to fill the vacancy was a tie due to one alderman voting present.  The tie was broken by the Mayor's vote for his selection.

In contrast, there was an appointment for a Treasurer which was published, applications received, reviewed, and interviews conducted.  This process clearly was transparent and hopefully resulted in the best person for the job.  We can only wonder why the same process was not done for the aldermanic vacancy.

There is going to be a special meeting next week and the purpose is so the board can accept nominations for Mayor and then vote for a replacement Mayor to fill the vacancy created by Cox's resignation.

We expressed our pleasure in seeing several board members at the Illinois Municipal League conference this year.  It's always a good thing for a community when their elected officials actually sit in the offered classes to broaden their knowledge on how municipal government is supposed to operate.

The video of the entire meeting is below, however, it is set to start at the point of the Mayor presenting the resignations. You can start it at the beginning if you wish to review the entire video.

Amendment to HCRCA Passed Out Of Committee 9-6 – Would OK Termination Of Employees, Withholding Of Services –

Loser of Mayoral Race Sues Winner, Media Entity, and Others –

Amendment to HCRCA Passed Out Of Committee 9-6 – Would OK Termination Of Employees, Withholding Of Services –

Loser of Mayoral Race Sues Winner, Media Entity, and Others –