This past Saturday afternoon, John Norton was served with copies of an Emergency Stalking / No Contact Order of Protection, which was granted by a Will County Circuit Judge on Thursday. 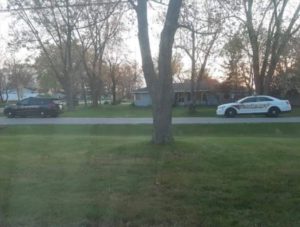 Four Will County Sheriff Deputies participated in the service of the Emergency No Stalking / No Contact Order signed against John Norton. From photos provided to us, it gave the appearance that they wanted to have all sides of his house covered in case he attempted to elude service.

This is the second Stalking Order against him in as many years.

Will County assigned Case Number 21OP680 to this one, and a Plenary Hearing is scheduled for May 7, 2021 in Will County Circuit Court.

In recent weeks, Bonnie Kurowski has become "friends" with him through one of his fake Facebook accounts. She has admitted that the current Wesley Township Clerk and Supervisor provided John Norton's contact information to her after she contacted them to try to find people that do not like us. Norton, or what we believe to be Norton through one of his fake Facebook accounts as attested to in Court testimony, has a demonstrated history of abusive, sexist, and sexually demeaning references towards women in comments posted to Facebook in one of the groups he is a moderator of, but Bonnie must be fine with that type of language and activity as she has "liked" and commented on some of his past posts.

We will post copies of the Court's Order and the Petition for the Stalking / No Contact Order once we receive them.