“Imagine Hillsboro, partnered with physicians at Springfield Clinic Hillsboro” to offer a Raffle.

According to a Hillsboro High School parent of teen daughters on the varsity volleyball team, the new Assistant Coach of the JV volleyball team, Beth Cady, distributed a flyer designed to entice the girls to get a COVID shot, while using their bodies as payment towards a chance at winning a Raffle drawing (lottery) for $600.00.

This has been described as “illegal financial coercion of a group of minors” and these minors were allegedly instructed by a teacher (Mrs. Conner), while passing out the flyers, that this is just like the flu shot and their fertility is not at risk. That teacher is not a medical professional.

The Raffles and Poker Runs Act describes regulated activities as:

“Raffle” means a form of lottery, as defined in subsection (b) of Section 28-2 of the Criminal Code of 2012, conducted by an organization licensed under this Act, in which:

(1) the player pays or agrees to pay something of value for a chance, represented and differentiated by a number or by a combination of numbers or by some other medium, one or more of which chances is to be designated the winning chance; and

Section 28-2(b) of the Criminal Code describes “Lottery”:

(b) A “lottery” is any scheme or procedure whereby one or more prizes are distributed by chance among persons who have paid or promised consideration for a chance to win such prizes, whether such scheme or procedure is called a lottery, raffle, gift, sale or some other name, excluding savings promotion raffles authorized under Section 5g of the Illinois Banking Act, Section 7008 of the Savings Bank Act, Section 42.7 of the Illinois Credit Union Act, Section 5136B of the National Bank Act (12 U.S.C. 25a), or Section 4 of the Home Owners’ Loan Act (12 U.S.C. 1463)

Raffles and Poker Runs REQUIRE a license, and the organization must be a bona fide religious, charitable, labor, business, fraternal, educational, veterans’, or other bona fide not-for-profit organizations that operate without profit to their members and which have been in existence continuously for a period of 5 years immediately before making application for a raffle license . . .

After considerable back-and-forth heated discussions, the school and raffle coordinators have discontinued the raffle. 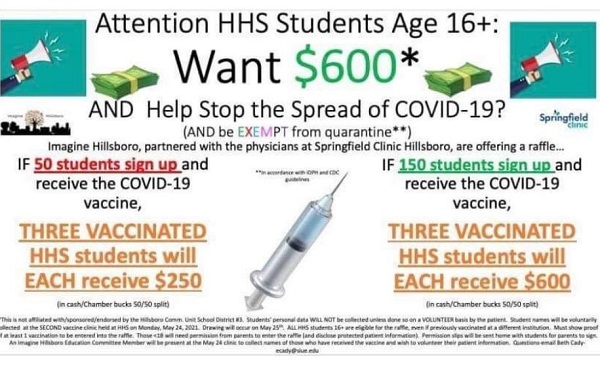