A refreshing experience in Florida

It was -4 when I pulled out of my driveway last Sunday for a business trip to Florida.  After picking up John in Paris, Illinois we headed south and wondered if we would beat the massive storm that was coming across the country.  Fortunately, we stayed ahead of it by a few hours and made our way to our Florida stops – Lake County, then Palm Beach.

During one of our dinner meetings, there was a Palm Beach County Commissioner who joined us.  As we were explaining our work I presented her with the same question we have asked local elected officials for years. Have you read the powers and duties for the office you hold?

Commissioner Maria Marino said she was working her way through the statutes regarding her powers and duties as an elected official.  Most of the time the response we receive to such a question results in a question back at us, such as “what are you talking about?”

Not only was Commissioner Marino sincere with her response, but it was also clear she was informed and knew there were actual powers and duties that came along with her position as a County Commissioner. It was truly refreshing to see an elected official who took her position seriously.

The following day we spoke again with Commissioner Marino and the subject of our question came up again.  To our surprise, this Commissioner not only was actively reading the laws applicable to her position, but she had also taken steps to inform the citizens of Palm Beach of those powers and duties to include pointing them to the actual law.

How refreshing is that?

A public official who knows there are laws that apply to their duties, reads them, shares them with the citizens, and then actually asks for their input on matters and provides not only a phone number but also her email.  Considering we have public officials who lie about even having an email it’s encouraging to see others recognize it is the people they serve.

After three days in Florida, I can say Illinois could learn a few lessons on how local government is supposed to operate.

Thank you, Commissioner Marino. It was truly a refreshing experience to meet an elected official who understands there is an actual rule book on their powers and duties. 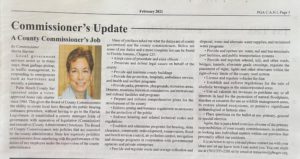 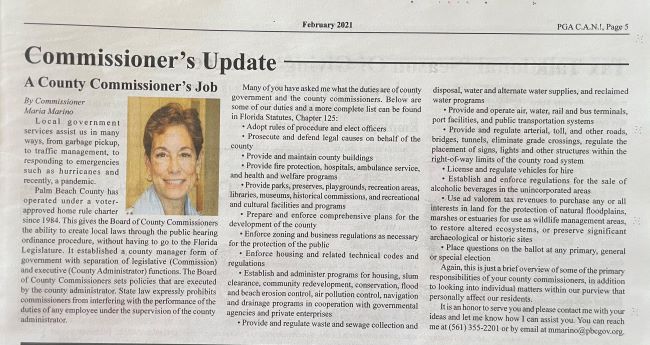