Can we agree the rule of law must be followed by our elected officials?  If we can agree on that simple foundation then we must then apply it equally to all our elected officials, including Governor Pritzker and his attorney, Kwame Raoul.  Today we lay the foundation why they have betrayed the public trust by not following the rule of law which lead to exercising power never granted by the Legislature.

Throughout every disaster proclamation related to COVID-19, the Governor had claimed there is a disaster due to a "Public Health Emergency".  In every court pleading we have seen from the Governor, the focus has been on the definition of Disaster under the law.  Within that definition, it does in fact state a Public Health Emergency is one of the prongs that qualify as a disaster.

For those not familiar with statutory construction, each word is to be read and the plain meaning of the words to be applied.  The legislature created a legal definition for a public health emergency that consists of two prongs.  We know that because after paragraph (a)(v), the word "and" is placed, not the word "or".  When this happens, it ties paragraph (b) to (a).  In short, any single provision in paragraph (a) and any single provision in paragraph (b) that meets the situation outlined would qualify as a public health emergency.

Additionally, even the statute itself outlines how it is to be interpreted.

Sec. 4. Definitions. As used in this Act, unless the context clearly indicates otherwise, the following words and terms have the meanings ascribed to them in this Section

"Public health emergency" means an occurrence or imminent threat of an illness or health condition that:
(a) is believed to be caused by any of the following:
(i) bioterrorism;
(ii) the appearance of a novel or previously controlled or eradicated infectious agent or biological toxin;
(iii) a natural disaster;
(iv) a chemical attack or accidental release; or
(v) a nuclear attack or accident; and
(b) poses a high probability of any of the following harms:
(i) a large number of deaths in the affected population;
(ii) a large number of serious or long-term disabilities in the affected population;
(iii) widespread exposure to an infectious or toxic agent that poses a significant risk of substantial future harm to a large number of people in the affected population.

COVID-19 does not qualify as a Public Health Emergency as defined by our State Legislature in the vast majority of the state, and questionably even in the worst impacted portions of the state.

A simple way to understand these types of statutes is to simply ask a question applying the words of the statute and fil in the qualified prong met in the first paragraph.

All math aside, the Governor included all 102 counties in his Executive Order disaster proclamation based on a "public health emergency".  Considering the first prong in paragraph (b) is tied to deaths, at least 43 counties do not qualify under paragraph (i).

(ii) To date, there has been no declaration from the government listing COVID-19 as a long-term disability so prong (ii) is not met. 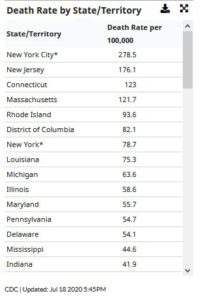 In fact, according to the CDC, Illinois only has 58.6 deaths per 100,000 people.  That is not a large number.  While we agree any death is a terrible loss, the current death numbers in Illinois are not even remotely close to qualifying as a large number when basic math is applied. As a comparison, CDC reports Heart Disease as having 198.4  deaths per 100,000 in Illinois based on the last report in 2017, which is over three times the death rate per 100,000 found with COVID-19.(see page 52 for CDC data)

The Governor and his legal team and possibly some major cities will be seeing lawsuits over the next few days and weeks on this matter, and by all indications of what the law actually says, he is not going to like it.  Much like the Governor claiming to be furious about what was being reported on Madigan's alleged involvement in the ComEd scandal, We The People are furious that our laws are not being read or followed by the Governor and his state agencies.

With these facts in mind, the Governor and the Attorney General should tender their resignations.