Current Illinois law provides that the Governor has broad powers during the first thirty (30) days of a disaster and the Illinois Department of Public health and local county health departments have supreme authority as it relates to a pandemic.  However, our Governor issued Executive Order after Executive Order well beyond the authorized 30-day time frame.

The Governor and the General Assembly have had sufficient time to address the constitutional problems in the Illinois Emergency Management Agency Act. Here is the rub.

Then the federal court judge sat on the case as long as he could, again giving the General Assembly and Governor more time to fix the statute.

Again, the General Assembly did nothing to fix the statute. Double Gobsmacked.

The USDOJ (yes that Bill Barr)  then intervened in the federal court case, and argued that the federal court judge should immediately return the Bailey v. Pritzker dispute to state court. USDOJ agreed that our state Attorney General engaged in forum shopping.  The federal judge then remanded the case back to state court without even addressing the USDOJ filing.

Today the state court judge issued his ruling and criticized the Governor for his repeated executive orders to address the pandemic when the law only gives the Governor powers for the first 30 days of a pandemic.   See attached order right off the judge’s bench.  Paragraph 6 applies the ruling to all citizens of the State of Illinois.

Following the hearing, the Illinois AG told the news that the Governor and Attorney General intend to appeal to the Illinois Appellate Court, and then the Illinois Supreme Court.  However, this will require the courts to engage in judicial activism/Alice in wonderland legal analysis to somehow justify the ultra vires Executive Orders issued by our Governor, and worse, reverse today’s well reasoned judicial ruling.

This could all be avoided if the General Assembly would just meet and fix the law…..just like other states have done.

There you have it….Happy Fourth.

Below is a copy of the Interview we had with Representative Bailey and his attorney Tom DeVore after the hearing as well as footage of the CNN interview that did not appear to go to well for CNN.

A copy of the Order can be downloaded at this link or viewed below. 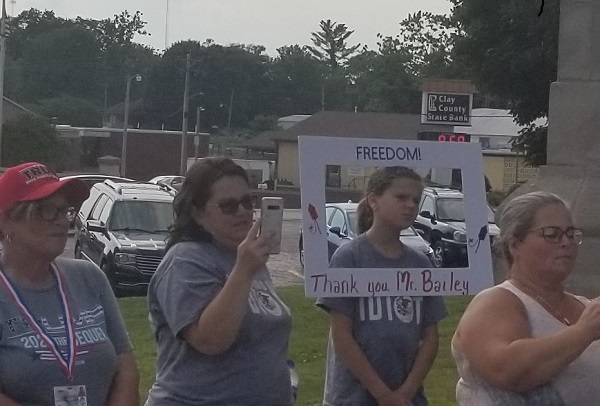