No matter what your personal views are on particular subjects, I think we can all agree the Government has no place in deciding which speech is acceptable, political or not.

The United States Supreme Court has repeatedly upheld the right to free speech, even when that speech is hated and offensive:

A Township recently attempted to censor our speech – it didn’t work out how they planned.

Now we see a County and a Township Park District censoring speech in the form of displays.

The following article is reprinted with permission from its author, Shane Saathoff @ the Country Herald. 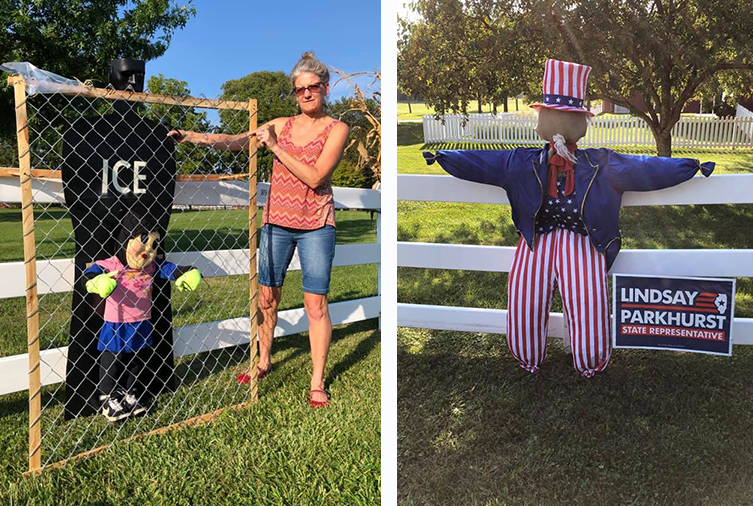 Fact. Immigration and Customs Enforcement detains immigrant children. The reality? Kankakee County Law Enforcement DOES NOT want to advertise it.

That didn’t stop Connect Kankakee from ruffling feathers in the County this past week during the Bourbonnais Township Park District’s annual Scarecrow Contest.

“We received calls from the law enforcement community and after reviewing the picture that my employees took for me, I made the decision that it was offensive and asked that they contact the owner to have it removed,” says Bourbonnais Township Park District Executive Director Hollice Clark.

Online documentation reports show the Kankakee County Corrections Department received over $10,000,000 annually from “Out of County – Rental” during both the 2018 and 2019 appropriation budget.

Within minutes of his appearance on the display fence, Bourbonnais Township Park District contacted the group to have it removed.

The scarecrow went through official channels to reserve entry spot #89 in the Bourbonnais Township Park District’s annual Scarecrow Contest. The contest is designed to engage the community, having residents and local businesses decorate and showcase their creative talents.

Connect Kankakee’s effort was an attempt to shed light on an otherwise hush mentality the County has taken by receiving federal funds housing ICE detainees at the Jerome Combs Detention Center in Kankakee.

“We agree that the reality of immigrant children being caged by ICE is completely offensive. We also believe we should be talking about this outrageous travesty.” Connect Kankakee said last Friday after being forced to remove the display.

It’s unknown if the Bourbonnais Township Park District will adopt new policies toward displays in the future to keep peaceful, politically related content that visually engages the public conversation from being displayed.

“As with all of our events, we will review and make decisions after the event is over.” Director Clark told us Wednesday via email.