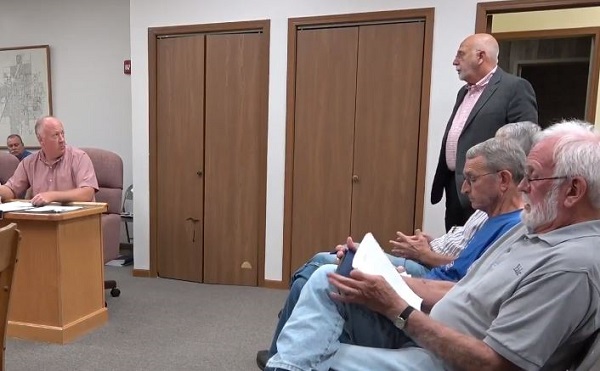 The City of Carlinville assistant attorney, Daniel P. Schuering, had a bad day at the last city council meeting. Instead of commenting on the still-pending Freedom of Information Act lawsuits against the city of Carlinville, Schuering elected to shift blame to the council. He accused Alderwoman Beth Toon of “knowing why” the lawsuits were filed and claimed she was the only person worried about the unfulfilled FOIA requests filed by the ECWds.

Schuering continued by attacking Toon’s credibility claiming she did not know what she was talking about pertaining to FOIA requests or the standard operating process for fulfilling FOIA requests. He stated the ECWd had 3 FOIA cases. (Our records only show 2 FOIA cases we have against Carlinville.) He also lambasted Toon doing the Watchdogs’ bidding and curiously stated he did not represent the city, rather he represented the FOIA officer.

Oh – and Scheuring also said that “any suggestion that [the ECWds] are anything other than political terrorists is just absurd.”  He claimed without evidence that what the Watchdogs do is a “waste of money.”

We agree there is a tremendous waste of money, but the waste is on the part of the City of Carlinville for failing to provide public records when presented with FOIA requests. The city wasted taxpayer funds by having to answer inquiries by the Attorney General, then voted to provide all the records, then elected to reverse their decision and not provide the records, and then continued to “kick the can down the road” on the lawsuits that followed. If I had been provided the records requested, there would be no lawsuits.  Any attempt a blame-shifting expense is wrong because the city brought these upon themselves as a result of their own actions.

We aren’t alone in seeing the waste - some of the aldermen have apparently discussed settlement proposals for five FOIA cases. Schuering stated he would discuss nothing about settlements during an executive session while Toon was present. Obviously, Scheuring is upset with being questioned in public while he continues to bill hours.

We call upon Carlinville taxpayers calculate legal and other indirect expenses tallying up from the city's multiple attempts to defend their refusal to provide public records. Citizens, ask your city councilman and mayor why they did not simply provide the records in the first place?

Finally, we suggest Carlinville give this attorney his walking papers ASAP because the city is paying Scheuring more taxpayer funds to go to a meeting, tell them what he is not going to do, and end up claiming we are political terrorists.