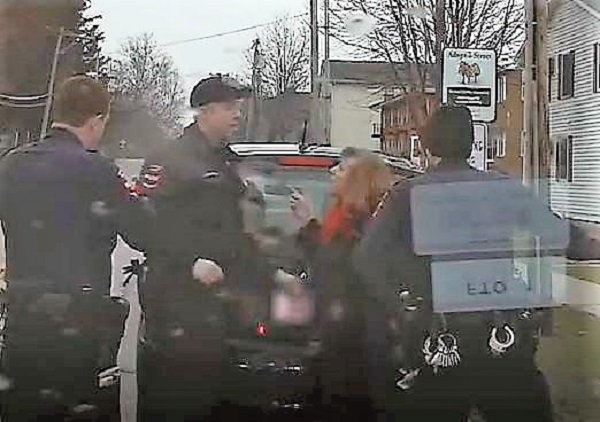 Watch this disgusting display as Judith (Judy) Valente was stopped by the Illinois State University Police on March 28, 2018 for driving on an expired license plate. The plate had been expired since December 2017. She was allegedly on her way to teach a class at Normal's Activities and Recreation Center.

Valente is a News Reporter for WGLT.org [an FM radio station owned by Illinois State University], claims in the video she was on her way to teach a class at the ARC of Normal, writes poetry, has some books for sale on Amazon, and is married to a retired Judge.

If today's reporters and teachers show no more basic human respect for police officers than what she portrays in these videos [she was pulled over for expired plates and they smelled cannabis], how can we ever expect the next generations to have any respect for them, or anyone else for that matter?

On arriving at the driver's side door and talking to Valente, the officers noticed the smell of cannabis, and asked her if she had a cannabis card.

As you can see in the video, Valente repeatedly threatens to call "the Chief" [of police] because she knows him, threatens that her husband [the retired Judge] is coming to the scene, and repeatedly threatens them not to touch her again [one officer stopped her from going back to the front driver's door while they were talking to her behind the vehicle which she voluntarily exited].

She was eventually written a ticket for expired license plates and released to continue driving.

The following is from BLNNEWS.com as written by Diane Benjamin:

At 4:20 an officer asks Judy if she has a medical cannabis card.  She acted appalled at the question.  She also tells the officers who she is and that she works at WGLT.  Around 6:30 the officers are discussing the smell in the car.  They then call for backup.

At 11:41 Judy makes the mistake of getting out of her vehicle.  She claims her husband is on his way and he may be able to explain the smell.  The “hands on her” happens at 12:45, it is nothing more than a light touch to keep her from getting back in the car.  They already told her they were going to search it.  She also drops the police chief’s name, evidently thinking that will help.  At 13:26 Judy claims to be totally opposed to cannabis.  This is a CAN’t miss part, if she isn’t high she thinks laws don’t apply to her.  Keep watching.

At 15:29 the sidewalk audio can only be heard on the second video.  That video is cued to start there.

Judy appears to be calling her husband and she repeats that she will be calling the chief.  She repeats numerous times an officer put his hands on her.  She also asked the officer if “he is like 17”.  Please note that NONE of these officers ever showed her anything but respect.  She never returned any respect to them.

Keeping watching.  Judy is taking video and the names of officers.  Judy claims the ticket won’t “put a hole in her pocketbook”.  She already knows it’s $120.  She continues to claim an officer put his hands on her.  The Sergeant arrives at 12:40.  She must not know she is on both video and audio because what she tells him doesn’t match the audio or video.  She AGAIN mentions the chief.

At 16:15, hubby tells her the police are just doing their job.  That is exactly what they are doing.

This story never made the WGLT news.  Maybe Judy’s boss watched the video and realized it isn’t a story.  I need to FOIA any complaints she filed and the written police report.

Judy Valente obviously has no respect for law enforcement.  WGLT needs to keep her from reporting on any stories involving police.  She is not capable of fair reporting.  All of her reporting should be suspect.  Facts don’t seem to matter.

This is the dash cam from the Sergeant’s vehicle. It shows the judge arriving: