Previously we reported on what we considered a conflict of interest and a crime, in which Collinsville Alderman Cheryl Brombolich settled a lawsuit she had against the city for a windfall financial settlement of $200,000.

Alderman David Jerome’s actual words were “In this case, the City Council did NOT vote and was not asked to vote on the payment of this settlement. This was done exclusively by the insurance company as it was their money.” Now we know how wrong Mr. Jerome was.

We have located a copy of the check (here) and the city’s own video (below) from the July 10, 2017 Collinsville City Council meeting.

It shows that Alderman Brombolich Motioned, there was a second, several minutes of conversation about another subject, and then she voted YES on the Roll-Call vote (as required by the Municipal Code) to pay the bills, which included the $10,000 check for the city’s insurance deductible on the lawsuit settlement, which we believe is an illegal settlement.

This is important because it shows that the City did vote to make this payment, and Alderman Cheryl Brombolich was the one that actually made the Motion, and later voted YES to make the payment. Without this city council vote, no payment would have been made, because the insurance was waiting on the deductible in order to cut the full check to Brombolich according to the settlement.

The Motion and Vote essentially authorize payment of the entire settlement the city was obligated to pay, either by way of insurance deductible or thru the insurance company – which is still considered funds of the city.

Brombolich was a participant, she influenced the vote by making the actual Motion, and further participated by signing the settlement agreement, which in our opinion is an illegal conflict of interest and a violation of the Public Officer Prohibited Activities Act concerning prohibited interests in contracts.

This settlement payment portion of the agenda is listed on page 14, below: 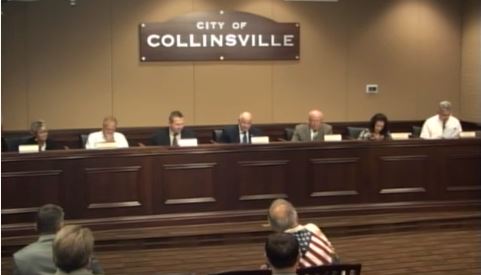