Truth – It must be reported – Governor Rauner should be ashamed!

This morning while having coffee with a dear friend and neighbor, it became clear he was experiencing the frustration with the distortions and lies about candidates.  Specifically, the information being distributed to voters statewide by Governor Rauner about his opponent, State Representative Jeanie Ives.

We report the truth based on hours and hours of research across this state.  We have learned how to dissect the words of elected officials to a level that frankly is shocking. Those who have ever traveled with John and I know, words have meaning and we dissect every one of them when it comes to statements from those in Government.

When Bruce Rauner traveled the state in what he claimed was an information gathering road trip prior to making his decision to run for Governor, we had a chance to visit with him along with several other local business leaders and politicians.  He went around the room listening to peoples concerns.  He had our attention. Why?  Because we were not allowed to film it for starters.  That is always a red flag to us.

As the discussion went around the table it was my turn.  I shared what we do and how we do it.  A nonpartisan model of fighting local government public corruption.  We got his attention, or so we thought.  “That sounds like a great model.  When I become Governor we will set up a public corruption task force and I want you guys on it”.  That was a slip on his part as he had insisted he had not decided to run yet. His mind was made up but his lips were not in synch. This may have been one of the first of many lies to come.

Well here we are 4 years later and this Governor has not lifted a finger to put together any type of public corruption task force. In fact, we are struggling to figure out why this guy can’t seem to even speak out against those involved in Public Corruption and it’s not like there haven’t been any opportunities.

Who stays silent with exposed corruption all around you?  Governor Rauner!

Some have insinuated that we support Representative Ives and that is why we have “started” exposing Rauner for his failures. It would do those people well to first do some research on how long we have been exposing issues in this administration, which started shortly after he took office. Every article we have written can be found at this link but to save some time, here are a few where we exposed this administration for what we consider total failures.

As a 501c4 non-profit, there is limited political involvement we are allowed to have.  Rest assured, this article is not about politics as it relates to who you should or should not vote for, but it is about the truth.

So how is one to go about knowing what is or is not true as it relates to candidates running for office?  For starters, those who blindly cast a vote, please don’t. Secondly, vote smart, which can only be done by educating yourself and asking the two key questions and getting answers to them.  Our success is based on those two questions.

Says Who and With What Proof?

The Governor has made a lot of claims about his opponent Representative Jeannie Ives so we know the answer to Says Who; Bruce Rauner.

Now the fun part!  What Proof is there to support the insinuations and allegations he is portraying to the citizens of this state in his effort to get your vote?

As said by Scott Read in The Dispatch-Rock Island Argus, regarding Rauners malicious political adds:  “It is a lie, wrapped in a prevarication, enveloped with deception, packaged in falsehood and bound up with a fabrication.”

He goes on to confirm more truth. “Other journalists are taking the same stand. Greg Hinz at Crain’s Chicago Business; Terry Martin at the Illinois Channel; and John Kass at the Chicago Tribune all have pointed out the same thing: When it comes to Ives, Rauner just isn’t telling the truth.”

For those that have received those disgusting flyers being sent out by Gov. Rauner or watched the tv adds you should ask, where did that come from?  As in the claims being made.

You need to watch that debate in order to understand the deception being played by our sitting governor. A deception on every citizen of this state and it’s shameful.

God-fearing or not, who lies to a Cardinal?

We will never tell people who to vote for, only that they should vote Smart!

We hope the people of this state are smarter after reading this information and do their own research before casting their vote.

One last tidbit, we have yet to find evidence that would validate the misinformation Rauner is spreading and we have tried.
.
Our work is funded entirely thru donations and we
ask that you consider donating at the below link. 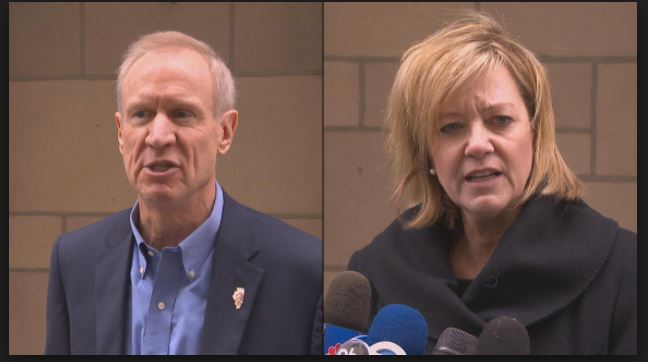