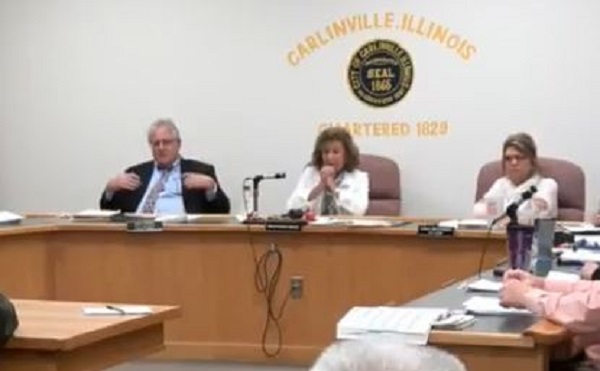 In the following video of Carlinville's March 19, 2018 meeting, you can clearly see Carlinville's attorney, Mr. Dan O'Brien, is having problems with people who want to participate in public comment, tries to shut it down in a preemptive rambling about litigation and other things that do not apply, shows his ignorance about litigation against the city, and attempted to convince Mayor Demuzio to commit a crime by violating the Open Meetings Act.

It was only through the level-headed, calm, quick-thinking of ECWd co-founder Kirk Allen, that O'Brien's elementary pleas failed miserably. It's almost as if some aldermen and the mayor had an informal agreement with O'Brien prior to the meeting that he would prohibit certain people from commenting. Pay attention to the alderman, clerk, and treasurer on the right side of the screen - they appear to be pushing Mayor Demuzio to say things she ends up regretting.

The Open Meetings Act grants any person the right to address public officials during open public meetings. An attorney cannot prohibit or restrict those comments.

The "litigation" claims by Dan O'Brien:

O'Brien claims he cannot communicate with Kirk because Kirk is part of Illinois Leaks and they have litigation against Carlinville.

FALSE: John Kraft (Edgar County Watchdogs) has the litigation, Kirk Allen is not named and Illinois Leaks is not named. Even if he were named, this would still be false, except for matters under representation.

Illinois Supreme Court RULE 4.2 specifically addresses an attorney's duty in communications with a person represented by counsel, and that duty is to "not communicate with that person about the subject of the representation" without the consent of the other lawyer. There was no indication that the "subject of the representation" (FOIA lawsuits) would be discussed during public comment, and even if it were to be brought up, no Rule prohibits the attorney from listening without commenting.

FALSE: Public Comment is a right, and there are no instances where a public body may prohibit anyone from commenting within the "reasonable rules" established by the public body.

FALSE: Claims that aldermen cannot communicate because of litigation:

Again, Illinois Supreme Court RULE 4.2, comment [4] clearly authorizes communications with that person (represented by counsel) on matters not under representation by another lawyer.  This comment also clearly states that "parties to a matter may communicate directly with each other"

So, under Rule 4.2, Carlinville's attorney was clearly wrong and gave what we consider to be improper advice to his own clients, and attempted to use his improper interpretation of Rule 4.2 to prohibit Kirk Allen from commenting during public comment time at this open meeting of the city council. He also misrepresented this rule by stating that the city council, aldermen, and mayor could not communicate on anything since litigation was filed.

May we suggest the citizens of Carlenville seek new counsel?