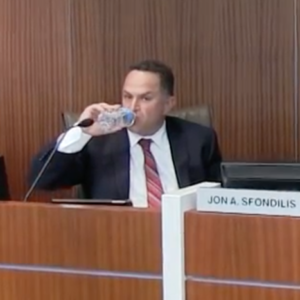 In recent months, the Village of Wheeling and its attorney James V. Ferolo (of the notorious law firm Klein Thorpe Jenkins) have embarrassed themselves by insisting that they can restrict the content of public comment during open public meetings and interrupt speakers when they do not like what the public has to say when given the floor to address the public body.

This is simply not the case, as the Open Meetings Act (OMA) does not allow a public body such as a Village board to censor what a member of the public can or cannot speak about when given the floor during the designated public comment portion of a board meeting. When given the floor to speak, a member of the public cannot be interrupted or heckled by a public body or be otherwise bullied to stop speaking. Further, the Constitution of the United States, in the form of the Bill of Rights and its First Amendment guarantee of Free Speech, does not allow any entity of government to decide what a citizen may or may not speak about in the presence of elected or appointed officials.

Considering the staggering amount of money paid by the Village of Wheeling to Klein Thorpe Jenkins, one would assume that KTJ attorneys such as Ferolo would research Public Access Counselor (PAC) determinations regarding the restriction of content and the censorship of free speech and see that a public body cannot dictate what the public may choose to speak about. Ample video evidence of Ferolo's abhorrent behavior during Village of Wheeling open public meetings shows him time and again interrupting the public, shouting at citizens, ordering the public not to speak about certain topics, bullying and threatening speakers, and otherwise engaging in conduct that I argue clearly violates not only the OMA but the public's basic civil rights.

A simple FOIA request to the PAC for recent determinations made against public bodies that violated the OMA by improperly restricting the content of speech yielded damning precedents to illustrate just how wrong the Village of Wheeling is for allowing James V. Ferolo to carry-on the way that he does during these board meetings. Here are just three examples (of many):

(1.) Adams County Board = In an October 2015 determination, the PAC stated: "Although OMA does not specifically address the types of rules that a public body may adopt, public bodies may generally promulgate reasonable 'time, place, and manner' regulations that are necessary to further a significant governmental interest...However, such rules must tend to accommodate, rather than unreasonably restrict, the right to address public officials." In the Adams County Board matter, a member of the public wanted to address the Board on a particular agenda item but the Board Chairman said he would not permit anyone to address that particular issue. Adams County also violated the OMA by requiring people to inform the County Clerk what they wanted to speak about seven days in advance of a board meeting. The PAC determined that such restrictions on speech are not reasonable and, thus, not allowed under the OMA. End result: Adams County was forced to change its written rules and remove the illegal restrictions on public speech.

(2.) Waukegan City Council = In April 2016, the PAC determined that the Waukegan City Council violated the OMA by improperly removing a man from a meeting after he started speaking about a former police officer by name; the Council insisted such comments about the police officer were "defamatory" and ejected the speaker from the meeting. The OMA does not empower a public body to decide what is or is not defamatory and a public body may not prohibit a speaker from talking about any person the speaker wants to talk about while that speaker has the floor during an open public meeting. In its determination, the PAC stated: "Notwithstanding the legitimate interest in establishing rules governing decorum, in order to withstand constitutional muster, any restrictions on public comment that are content-based must be narrowly drawn to serve the purpose of preserving decorum." Waukegan had prohibited "personal attacks against others" or "rude or slanderous remarks" but such prohibitions do not pass constitutional muster because the PAC concluded they are "susceptible to overbroad and arbitrary application" (and what constitutes "a personal attack" is "an entirely subjective question that is necessarily dependent upon the listener's personal perspective"). End result: Waukegan was forced to change its illegal public comment rules.

(3.) Crete-Monee School District 201-U = Also in April 2016, the PAC determined that it is a violation of the OMA for members of a public body to repeatedly interrupt a member of the public who has been given the floor to address a public body during public comment. The Crete-Monee School District had behaved similarly to the Village of Wheeling, where if board members did not like what a person was saying they would interrupt the speaker, cut that person off, and heckle or harangue the person until they were sufficiently bullied and stopped speaking. Crete-Monee also improperly required people wishing to address the board to write their names, addresses, emails, and topics on a form (that was required to be completed in its entirety before someone was allowed to speak); the OMA only allows for a public body to have a sign-up sheet for speaking that has the purpose of notifying the public body that a person wishes to speak (so that an order for speakers can be created and people can be called upon to speak when it is their turn). No public body can require a person to state their name, their address, or their topic in advance because such requirements may create a chilling effect. The First Amendment does not allow a public body to demand someone's name in order for that person to be allowed to speak, since there are occasions when a member of the public may be afraid to identify themselves when speaking before a public body about a sensitive or controversial issue. In the matter of Crete-Monee, the PAC determined that repeatedly interrupting speakers "unreasonably interfered with (the) statutory right to provide public comment, and may have prevented (the speaker) from fully addressing the topic"; the PAC also concluded, "Because the Board enforced an unreasonable rule to infringe on (the) right to address the Board during its August 18, 2015 meeting, we conclude that the Board violated section 2.06(g) of OMA." End result: the school district was forced to stop its illegal practices.

Many other examples of public bodies being told that they cannot restrict the content of speech during public comment (and that they also cannot interrupt or heckle speakers) can be easily found in previous letters of determination issued by the PAC in response to Requests for Review submitted to the Attorney General's Office for OMA violations (here).

It is a mystery to me and other observers of the Klein Thorpe Jenkins law firm why attorneys such as James V. Ferolo are either not aware of these determinations or choose to willfully ignore them.

Those familiar with the ongoing abuses committed by the Village of Wheeling at its board meetings will note that the Village consistently engages in the very same conduct that the PAC told Adams County, Waukegan City Council, and Monee-Crete School District that those respective public bodies could not engage in. If recent determinations from 2015 and 2016 establish that public bodies may not restrict the content of speech or interrupt the public when a speaker has the floor, then why is James V. Ferolo of Klein Thorpe Jenkins insisting that the Village of Wheeling can violate the OMA (and the US Constitution) in the exact same ways?