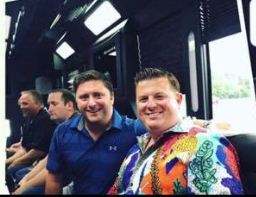 (Tinley Park Mayor Jacob “Jake” Vandenberg, in Hawaiian print shirt on the far right. One of the Village’s attorneys, Patrick Connelly of the firm Peterson Johnson Murray, is pictured just to the left of the unidentified man in blue in the center of the photo. The picture was apparently taken aboard Vandenberg’s rented white party bus on 7/26/17 and subsequently posted to social media.)

Tinley Park Mayor Jacob Vandenberg was visibly intoxicated and showed immense immaturity and poor judgment after a recent concert by Paul McCartney where he stopped traffic and engaged in a loud, belligerent spectacle while abusing his title of Mayor. In doing so, he disappointed many supporters who believed that, as a public official, Vandenberg would keep his campaign promise to restore dignity (and the public’s trust in government) to the Mayor’s office after defeating disgraced former Mayor David Seaman in last April’s election.

As we have reported, Seaman was one of the Tinley Park public officials most responsible for the scandal that engulfed the Village in 2016, when Tinley Park’s erstwhile former Planning Director Amy Connolly was accused of conspiring with an out-of-state low-income housing project developer (the Buckeye Community Hope Foundation) to tamper with the Village’s zoning codes so that the developer’s plans could be pushed through against the wishes of the community. Vandenberg won election to the Mayor’s office chiefly for promising to undo the damage caused by Seaman and his cohorts and to get to the bottom of everything nefarious the former administration may have been up to (including anything that the public doesn’t even know about yet). But Vandenberg’s sloppy and apparent drunken behavior has now caused concern for Tinley Park voters who thought all of the scandal and drama was over when Seaman was booted from office.

As the saying goes: the new boss is acting much like the old boss.

According to police records obtained via FOIA request and posted to the Village of Tinley Park’s website FOIA portal, on July 26th, 2017, Auxiliary Officer Justin Blackburn was assigned to traffic control on the night of Paul McCartney’s concert at the Hollywood amphitheater in Tinley Park. Officer Blackburn reports in a written statement he made to his supervisor, Sargent Patrick St. John, that Mayor Jacob Vandenberg was highly intoxicated and emerged from a white party bus holding a can of Miller Lite after the bus stopped at the intersection of 183rd and Oak Park Avenue. (Photos of Vandenberg and other public officials, such as Village Attorney Patrick Connelly of the firm Peterson Johnson Murray, presumably riding to the concert together were posted on social media, apparently by one of the revelers on Mayor Vandenberg’s party bus.)

Officer Blackburn reports that Mayor Vandenberg smelled strongly of alcohol, behaved disorderly, and created a dangerous situation by stepping into the intersection and attempting to stop and redirect traffic so that his party bus could head west (towards adventures unknown). Another unidentified member of Vandenberg’s party also stepped off the bus (holding his can of Miller Lite) and was nearly knocked over by the still-open doors of the bus as Vandenberg attempted to direct it through traffic.

Another incident report, this time completed by Officer D. Reilly, picks up the story after the party bus moved away from Officer Blackburn’s position and encountered another traffic stop. Officer Reilly reports that Mayor Vandenberg walked determinedly towards the policemen working this detail and ordered them to “move the cones we are going left move the cones.” Officer Reilly was ordered to remove the cones so that the Mayor’s party bus could go west as he wanted. These cones were in place to stop vehicles from going north onto Ridgeland Avenue so the police could best control egress from the Hollywood amphitheater (and not have traffic spilling into all directions and creating a jam). According to Officer Reilly’s statement, police had to stop everything they were doing during Mayor Vandenberg’s stunt to prevent an accident from happening while cones were moved and chaos was created by the party bus driving where other vehicles were prevented from turning.

A third statement, this time from a traffic worker named Theresa Holford, contains an account of Vandenberg loudly shouting “Mayor coming through, Mayor coming through!” as he picked up cones in the rain and moved them so the white party bus could get through the barricade and onto Ridgeland Avenue. Once Mayor Vandenberg moved the cones, other cars started following the bus and chaos erupted, until Holford put the cones back. This was all occurring during a downpour that lowered visibility for confused drivers, making Mayor Vandenberg’s actions even more dangerous. All the while, Holford reports Vandenberg continuing to shout, “I’m the Mayor. Mayor coming through!” and states that when she recognized that it really was Mayor Vandenberg she no longer tried stopping him; she just put back the second set of cones that he moved and watched his party bus drive through the intersection as the Mayor wanted.

A fourth traffic officer to witness this spectacle, Robert Ebeling, reports in his statement that Mayor Vandenberg’s actions caused vehicles to have to slow down in the pouring rain to avoid hitting him as he shouted in the middle of the intersection that he was the Mayor and that “his people” were on “his bus” and they were all “going to go west,” barricades be damned. Ebeling reports that Mayor Vandenberg was endangering not only himself but pedestrians and the occupants of other cars. Ebeling further states that “He smelled of alcohol, had glassy/bloodshot eyes and was swaying side to side…He replied by trying to shake my hand and started saying words but his words were so slurred I could not make out what he was saying.”

During the subsequent Village Committee of the Whole meeting on August 8th, 2017 (video below), Mayor Vandenberg was confronted about his dangerous behavior after the Paul McCartney concert. The Village’s attorney, Patrick Connelly, interceded and advised Mayor Vandenberg that he didn’t have to answer the public’s questions about his actions. To his credit, Vandenberg decided not to lawyer-up and spoke to the public. He admitted that he engaged in “poor judgment” after claiming that he was frustrated with the traffic situation. He denied “bullying” police officers and said that the next day he apologized for his actions to six people involved in the incident. While this is more than most public officials would do when caught in wrongdoing, Vandenberg failed to own up to his abuse of title when shouting at the traffic officers and moving the cones.

He claimed instead that he attended the concert as a “private citizen” who bought his own tickets and paid for his party bus on his own, but the traffic officers’ statements produced pursuant to the FOIA request all corroborate that Vandenberg repeatedly referred to himself as Mayor with the expectation that in doing so the officers would back down and do as he ordered them to do. Since the officers complied and Mayor Vandenberg got his way and his party bus indeed crossed through the barricades and headed west as he wanted, he was not perceived as just any other “private citizen” by the traffic officers who seem to have felt obliged to obey his commands that night.

No mere “private citizen” could have gotten away with stopping traffic, moving cones, and heading down a barricaded roadway with no police consequences.

In our opinion, the officers should not have complied with his demands.

According to reports on Tinley Park-focused social media pages, at least one ethics complaint has apparently been filed with the state against Mayor Vandenberg for his apparent intoxicated behavior on 7/26/17. This story will be updated as more information becomes available.