A recent Freedom of Information Act (FOIA) request to the Orland Park Public Library (OPPL) yielded a PDF of food and beverage receipts in which this public body chose to improperly redact non-exempt information such as the names of the employees either making or authorizing the purchases. In one example, a charge of $96.50 was made by an unidentified individual on 6/23/17, with only two words written in the required explanation lines of the credit card authorization form that Library employees are required to complete for all purchases.

This form contains a large amount of open space in which employees are expected to write a thorough explanation for why they are spending public funds that day, but more often than not OPPL employees seemingly write as little as possible, such as the two-word “ALA expenses” explanation for the $96.50 on 6/23/17. There is absolutely no indication given on this form for what that $96.50 bought, so the public is forced to guess and play detective here, with also no clue as to who the person was that spent this money.

Why is the Orland Park Public Library hiding this person’s identity and concealing what they purchased with public funds? 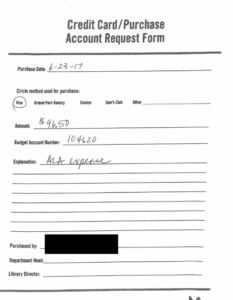 Later in the same FOIA production, a receipt for $96.50 turned up from a Chinese restaurant in Chicago named Lao Ze Chuan. This is an expensive restaurant in the city’s Chinatown neighborhood on Archer Avenue that is owned by convicted felon Tony Hu, who is currently serving time in federal prison for fraud and money laundering.

Suspiciously, the Orland Park Public Library chose not to include an itemized receipt for the purchases made at Lao Ze Chuan on 6/23/17, so the public cannot see what was ordered by the mystery person who supposedly went there. Lao Ze Chuan, like every table service restaurant in the country, prints an itemized bill that the waitress brings to the table when it is time for diners to pay. This means that whoever it was (whose name has been improperly redacted by the OPPL) that allegedly ate at Lao Ze Chuan was given a piece of paper that day detailing everything ordered, including any alcohol that was potentially ordered for the table. Why was this itemized bill not produced as a document in response to the FOIA request about the OPPL’s spending? 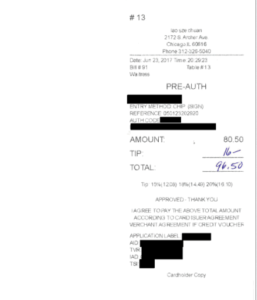 Why did the OPPL choose instead to just produce a receipt without the items ordered? It’s standard practice for a restaurant to bring the check to the table and ask for payment; then the waitress takes the guest’s credit card and returns with smaller slips of paper for the guest to sign, with one copy going to the restaurant (the Merchant copy) and the other retained by the guest (Customer copy). Here, the OPPL has produced that Customer copy but has disappeared the actual itemized check. Why did they choose to do this?

This matters because we have $96.50 of taxpayer funds that was spent by a mystery person (at a business owned by a man convicted of felony fraud and money laundering) and there’s no explanation for what was actually purchased. Lao Ze Chuan is more expensive than an average Chinese restaurant (or Panda Express in a mall), but it’s still difficult to run up a bill for $96.50 for a single diner. Even with two people strapping on the old feed bag together and stuffing themselves to bursting, reaching that high of a total for one meal is difficult unless alcohol is being ordered. A few glasses of wine or several cocktails would be required to spend that much in most cases. An itemized check would have shown the number of guests at the table as well as everything they ate (and drank), but the OPPL chose not to produce that itemized check so the public is left to wonder and guess what was going on and who was involved.

If the Orland Park Public Library claims it conveniently “lost” this check so the public can never see what was ordered and how many people ate that night, it’s a simple matter for the OPPL to obtain a reprint of the check from Lao Ze Chuan. Business travelers do this all the time, when they eat meals they want to be reimbursed for but they misplace the itemized bills while traveling. At a private company, the accountant rarely approves reimbursement without an itemized bill because many companies will not reimburse for meals where alcohol was ordered or where multiple people ate and the company has only agreed to reimburse for what its actual employee consumes.

An argument can be made that the Illinois FOIA statute requires the OPPL to obtain a reprint of a document that is maintained by a third party (such as the restaurant Lao Ze Chuan) if the public body claims its employee “lost” that document; in this case, an itemized bill was given to the OPPL employee who spent $96.50 at this Chinese restaurant, so that document was in possession of an OPPL employee at one point on 6/23/17 when the waitress, we assume first presented the check. If that employee threw the document away or otherwise “lost it” (in hopes no one would ever see what was ordered), the Orland Park Public Library has a duty to obtain a new copy of the document from Lao Ze Chuan so the public can see the number of people who lived it up and filled their bellies on the public’s dime that night.

Imagine the consequences if every public body in our state was allowed to conduct itself the way the Orland Park Public Library does when it comes to spending taxpayer funds. The names of the people doing the spending are blacked out, so the public can’t tell who is burning through this money. For explanation, not even whole sentences are written down on documents, making it impossible to figure out why the money is being spent. Documents that detail exactly what was purchased are thrown away or destroyed, leaving only skimpy slips of paper showing the final total but never what was bought and how many people were involved in buying it. Taxpayer funds are charged over to a business owned by a convicted money launderer, but no records are provided showing what that payment was actually for or if it was indeed legitimate.

For all the public knows in looking at these two documents produced for the OPPL’s spending on 6/23/17, a single bottle of very expensive wine could have been purchased and one Library employee could have sat alone drinking it for the evening. There’s nothing produced here that shows any food was ordered or more than one person was at the table. If the Library has a policy that prohibits employees from spending more than $35.00/day on food when traveling and nothing on this receipt shows there was more than one person present, then the mystery person (whose name was blacked out) more than doubled the amount she or he was allowed to spend that day.

The great irony in all this is that once again it is a public library engaging in these grotesque spending and FOIA abuses: so it’s the people who are supposed to safe-keep and catalog information who excessively redact, conceal, obscure, and conveniently “lose” whatever information they don’t want the public ever to see.