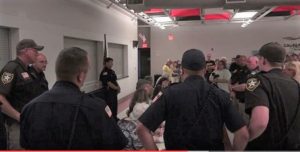 In yet another example of elected officials inability to follow the law, even after exposed to it, the Stark County Sheriff Steven Sloan, enforced the rule of law by shutting down the County Board meeting after the County Chairman chose to ignore the law rather than follow it.

At the beginning of the meeting, we spoke with the Chairman regarding their public speaking policy which requires people to sign up by noon on the day of the meeting in order to speak.  She insisted, along with another board member that we were not allowed to speak because we did not come to Stark County and sign up by noon for a special meeting to be held at 7:35pm.  We assured her we would be speaking.

Stark County is a small county north-west of Peoria, Illinois with a population of 5,800.  To keep things in perspective with other meetings we have attended, the attendance at this meeting exceeded 200 people, leaving standing room only in the cafeteria of the local school.  Our hats off to the citizens of this small county who put more citizens into this room than we have ever seen when compared to population.  The College of DuPage meeting which had upwards of 500 people in attendance for a county of close to 1 million is now considered minor attendance when compared to the Stark County Board meeting attendance last night. Again, congratulations to the citizens of Stark County as you now have shown the rest of the country what true citizen involvement is!

The crux of the violation was their failure to follow the counties code for special meetings.  Even though the Chairman and one of the board members tried to insist the meeting was not a special meeting, they will  have a hard time convincing anyone of that when it’s posted on their own web site as a special meeting, considering they signed a paper requesting the special board meeting, which makes it subject to certain requirements in the Counties Code.

(55 ILCS 5/2-1002) (from Ch. 34, par. 2-1002)
Sec. 2-1002. Special meetings. Special meetings of the board shall be held only when requested by at least one-third of the members of the board, or when requested by the chairman of the board in counties where such chairman is elected by the voters of the county, which request shall be in writing, addressed to the clerk of the board, and specifying the time and place of such meeting, upon reception of which the clerk shall immediately transmit notice, in writing, of such meeting, to each of the members of the board. The clerk shall also cause notice of such meeting to be published in some newspaper printed in the county, if any there be. In case a vacancy arises in the office of clerk, because of death or other reason, then the request shall be addressed to the circuit clerk who shall perform the duties of the clerk pursuant to this Section.
(Source: P.A. 86-962.)

We confirmed in advance that the meeting notice was not published in the newspaper as required, which means they did not follow their counties code duties, which also required one-third if the board members to request this meeting in writing, addressed to the clerk, who then must perform her obligations.  The clerk did reach out to us for a copy of the applicable statute, which we gladly provided.

In order for a County Board to hold a special meeting, one-third of the board shall request the meeting in writing.  That is a duty.

One could easily argue that the board neglected their duty in the calling of this special meeting and are not subject to civil action and could face a $200 find for every such offense.  To date, they have not followed the proper calling of special meetings, which appears to four of them already this year.

If the board would have continued to move forward with their meeting, which clearly was not published as required, one could easily argue that action would constitute Official Misconduct under the criminal code.

(1)Intentionally or recklessly fails to perform any mandatory duty as required by law; or

(2) Knowingly performs an act which he knows he is forbidden by law to perform; or

Board members who hold a meeting that was not properly noticed to the public by the very law they are bound by would appear to be a reckless failure to perform their mandatory duty under item #1 of the Official Misconduct statute.  Continuing to conduct a meeting that did not have the proper publication would be performing an act (conducting the meeting), which they knew was in violation of law, which appears to bring item #2 of the Official Misconduct statute into question.

You cannot conduct the people’s business without following the laws that apply to notifying the public.

We spoke with the Sheriff and the State’s Attorney prior to the start of this meeting and their was no disagreement with our position on this matter.  We informed the Sheriff that we felt it best for the public to have their comment period and then I would go to the podium and present the information to the board in hopes they would follow the law and stop the meeting.  As predicted, the Chairman chose to ignore the law and upon doing so I asked the Police in the room to enforce the rule of law.

Thank you to Sheriff Sloan for enforcing the law on the Stark County Board as well as the State’s Attorney who advised them to adjourn this meeting.

Citizens of Stark County, we thank you!