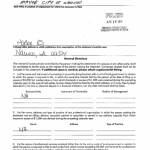 Among the questionable transactions were purchases from companies owned or managed by City Officials, since these transactions can be a conflict of interest. There is a process defined by State law, and managed by the County, that is intended to limit the effect these dealings can have.  A “Statement of Economic Interest” is required from each public official, and must be updated each year.  These documents are available for review by the public.  Those filed with the Illinois Secretary of State can be reviewed online, but those filed with Hancock County must be individually requested, and the individual whose form is reviewed is notified of who requested to view the form (including their name, address, phone number, purpose, and occupation?).  These forms have already been requested and received for many City Officials, and the process is underway to receive all of them.  This was initially limited to five years, but the issues raised will expand that further.

As a case in point:  Mayor John McCarty has filed Statements of Economic Interest with the Hancock County Clerk, the filing of which is required by law.  In each of these forms, he has indicated that he has no ownership in any entity that does business with the City of Nauvoo. 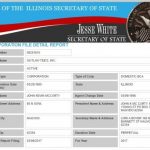 The system maintained by the Secretary of State of Illinois for business registration shows that John McCarty is both the Agent, as well as the President of Outlaw Tee’s, Inc.

The City’s official Public Notice, places the figure for FY 2015 at $9,798.  Clearly not all transactions are included in the expense report we received through our FOIA request. 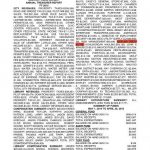 We do not have details on many transactions made through the City’s Hotel Motel Tax Board, since there are at least two accounts used by the board. One which utilizes the City Treasurer (the Tourism Director’s payroll, travel expenses, rent, utilities, etc.) and another which receives funds from individuals, and is used for other expenses not reflected in the City’s check register. (See “Who May Receive Funds for the City?“) Perhaps this helps to account for some of the disagreement. Details of these accounts have been requested, but have not been received to date.

So, even though the Statement of Economic Interest form filed by the Mayor does not disclose it, his business, Outlaw Tee’s does do business with the City.  Once all financial documents are reviewed, the level may grow.

What are the penalties for failing to complete this form accurately?  The Statement of Economic Interest form specifies that the penalty “shall be a fine not to exceed $1,000 or imprisonment in a penal institution other than the penitentiary not to exceed one year, or both fine and imprisonment.”  There are at least six instances of this form not being filed correctly, additional review is needed to determine any additional incorrect statements.

Why does this statement matter?

This statement “alerts public officials to their own financial interests and potential areas of conflict.”  Further, “Public officials who have a conflict of interest in a decision must disqualify themselves from making that decision or face civil and criminal penalties.”  Secondly, “Disclosure…enables the public to judge whether there was a risk of governmental decisions” being “affected by a public official’s financial self-interest or that of supporters or friends.”  Since the Mayor does not vote in City Council meetings (but may be called upon to vote in case of a tie), it is likely there will be the claim that he did not “make” any decisions relating to his business.  That does not relieve his responsibility to eliminate even the potential for conflict of interest from those he associates with in City government and to complete statements filed with the County accurately and truthfully.

If this were the extent of the issue, there would simply be consequences determined by a judge, and a commitment to complete the forms more truthfully in the future.  But the Statement of Economic Interest leads to areas where City Officials may receive benefit from services provided on their behalf by other public bodies, or the use of public funds to enhance their business dealings.  This has required a broader look at what services the City provides to promote, service or support all activities where public officials receive benefit. This has resulted in several additional requests for information to the City of Nauvoo. We recently met with investigators from the Illinois State Police.

First, we have to thank the Illinois State Police Investigators of Zone 4 for the time (over two hours to review all the material) they gave us.  They listened, showed concern, provided insight, and were very helpful.  They have a tough job, dealing with a lot of difficult situations. They were great.

I received a call on 2 May 2017 from the State’s Attorney in Hancock County, Jason Pohren.  When he called, he had the two Illinois State Police Investigators in his office, and was calling to give me an update.  A great courtesy.

As he informed me, Mr. Pohren previously was employed by the City of Nauvoo, both as a part-time police officer, and then as a Training Officer. This, coupled with the fact that, in that capacity, if a crime did in fact occur, he stated that he “could have been a witness to a crime” (not knowingly I am absolutely confident), which would mean he would not be the person to investigate this issue due to the potential conflict of interest.

He encouraged us, that if we had someone at Lisa Madigan’s (the Illinois Attorney General’s) office, I should call them. So, on Tuesday I called David Navarro, the Chief of Public Integrity Unit of the Illinois Attorney General’s Office.  It was an informative call, and he assured me that Mr. Pohren knows the process to follow to refer a case that may have a conflict, to his office, and seemed surprised that he had not done so. He has done so in the past. We encourage the State’s Attorney to do so.

Information contained within this article provided by, and used with permission of, local Nauvoo Watchdog: openNAUVOO.org

Mayor McCarthy was contacted through his email address and asked for comment. He has not replied as of publication.