This is what happens when local elected officials think they can do whatever they want, the law be damned.

We believe the Jasper County Clerk and Recorder has an illegal fee and electronic device search policy, and the State's Attorney and Sheriff's Department assisted her by enforcing the unlawful fee policy thru an unlawful arrest and detention. If that proves to be the case, this victim should sue Jasper County into bankruptcy. 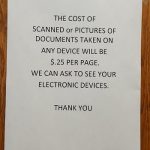 According to the police report, after snapping two separate photographs of real estate deeds using his own personal smartphone, the County Clerk demanded payment of 25 cents for each photo he had taken. He rightfully refused (in our opinion) to tender the unlawful demand of payment.

He was also in the Jasper County State's Attorney's Office wanting a copy of something from there and complaining about the attempted forced payment of photographs he had taken with his own device. The State's Attorney demanded to know who he was, and the landowner refused to identify himself.

After the second request for identification and subsequent refusal, the State's Attorney called the County Sheriff to the courthouse in what appears to be a way to intimidate the victim of this crime, wait, I mean in order to identify the "strange" person who was "acting suspicious" and "causing a disturbance" for "security" purposes.

Back in the County Clerk's office, when asked by the Sheriff's Deputy to identify himself, he again rightfully refused since he was not committing a crime, he was not under suspicion of committing a crime, was not under arrest, and was not detained. He was asked a second time and again refused. At that point, he was wrestled against the wall, placed in handcuffs, and taken to the interrogation room at the Sheriff's Department where they extracted his identification.

According to the victim, officers failed to read him his Miranda rights and refused victim's access to his attorney, three times, and continued questioning him after refusing to allow him to contact his attorney.

Officers then claimed they called and obtained advice from the Attorney General's Office, who they also claim told them there were no specific rules on fees for photographs - it is unclear on whether or not the Sheriff's Department notified the AG's office that it was actually a photo taken from with the citizen's own cell phone and not a photo provided by the County Clerk.

They released the landowner after telling him the next time he takes photographs of public records in the clerk's office he has to pay 25 cents per photo and dispute it later with the AG's office. No charges were filed.

Victim then submitted a FOIA request for a copy of the phone call, among other things, in which it was written into the police reports, that the State's Attorney made the call to the Sheriff's Department - but since the Jasper County FOIA Officer is the State's Attorney, he denied the FOIA request stating, in part, that providing the records would identify the complaining person (even though the police reports already did that).
.