Parks Commissioner Joe Ewing gets vulgar, texts “Shove that congrats in your _ _ s” –

Wow, Clark County, this is what you voted for. Own it.

We knew reality would eventually set in when he realized he no longer had control over anything at the long-embattled Clark County Park District, but he couldn't even take a congratulations from a fellow candidate, who lost, and was attempting to tell Ewing "congrats on your win." 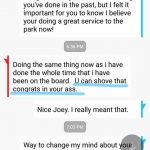 Losing candidate Lisa Thomas texted Joe Ewing a simple congratulations for his victory at the polls, and he responded with vulgar language. Way to be a good winner Joey, still feeling guilty from the past election?

Joe Ewing is the Clark County Park District Commissioner who we had written about for alleged forging of election petition sheets at the last election - we have the before and after copies, so we do know for a fact they were forged.

We also wrote about him appointing an Ethics Commission consisting of himself, another commissioner, and the newspaper owner and business partner of a third commissioner - all of whom had ethics complaints against themselves or their business partners - and then held an illegal meeting, confirmed by the Attorney General, to find none of themselves did anything wrong (LOL) - (that's usually how it turns out when you can appoint yourself to the commission hearing complaints against yourself and do it all in an illegal meeting).

We also wrote about his vote to attack a FOIA requester in an attempt to silence her criticism of the park district. Why does he hate the first amendment?

And the voters of Clark County voted him in again. Amazing.

We asked for comment from Ewing but have yet to receive any response.