One thing that most voters expect and demand of a candidate is Truth. Especially on a candidate questionnaire.

When candidates for office decide to try and skirt around the Truth, we believe it is our duty to call them out while informing potential voters so they may make an intelligent decision at the polls.

Mayor Dean Argiris has been telling some tall tales lately in an effort to thwart bad press that he brought upon himself.

Additionally, he reimbursed the city several times from a business he operates (AIM Insurance Agency, Inc.), so not only was it a personal purchase, some were also purchases in the course of his private business, which meant the Village of Wheeling was subsidizing his private business expenses – however, its registration with the Illinois Secretary of State had been involuntarily dissolved years earlier and it has no longer been registered to operate in Illinois since mid-2012. But he was still using its checking account as late a November of 2016.

Top that off with late payments, 32 times in the last 34 months, to the city for water/sewer bills – which, had it not been for a State Representative from Naperville who introduced a Bill several years ago to change the Illinois Municipal Code allowing this type of debt owed to municipalities, Argiris could have been ousted for those late payments. 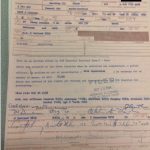 Finally, back in 2013 on a Daily Herald Candidate Questionaire, when asked the question of “Have you ever been arrested for or convicted of a crime?” He answered “NO”, which is not what Court records indicate. According to Cook County Court Docket no: 94356906 he was arrested on October 13, 1994, at 10:00 p.m. in a Chicago Police Department Vice-Raid, prostitution sting operation, for attempting to obtain “Oral Copulation” for the sum of $20.00. The problem was, he solicited it from a female CPD officer according to the arrest record. He was arrested, booked, and his vehicle was allegedly impounded.

Argiris most recently told the Daily Herald that the police didn’t arrest him, and that it was all a misunderstanding – LOL – if that was the case why was he fined and arrested? His attorney even told the Herald it was a “Quasi-criminal” complaint which was civil and not an arrest. CPD and Court records show otherwise.
.