After the defeat of the sales tax referendum several years ago, the Robinson Schools decided it was much more important to keep their kindergarten kickball (and HS Football) coach instead of keeping 6th grade sports - Was this a form of punishment to the voters for rejecting the sales tax? The sales tax referendum lost 72% - 28%, a miserable failure... The football team is so important to the school district that it hasn't even updated the schedule on its website since 2014 - maybe the win-loss record is why no updates are on the website?... 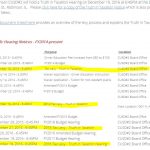 We wonder why they even bothered with a referendum since they have had "Truth in Taxation" hearings each and every year since defeat of the referendum, as far back as their webpage goes - which means they went thru the motions to inform people and raised your taxes to whatever they wanted to raise it, without any real consequences.

The current superintendent and school board are the ones pushing these increased taxes, and they continue asking for more, no matter which referendums they need to pass. When will the madness stop?

This school district has a budget of $14,700,800, only 1641 students, a newly remodeled office building for the administration, and only 32% of students ready for the next level according to Illinois report Card website.

In their 2017 budget, they claim a $7 million dollar fund balance ($400k more than last year) while having expenses of over $14 million, but then project a budget of only $7 million for the next few years. Where did the other $7 million go?

Below are the pay schedules for Timothy Nolen,  the Kindergarten PE Coach (and HS Football Coach), who is the allegedly highest paid teacher in the district, and has received a 6% raise this year, making his salary around $106,000 for the 2016 year. Sources are also telling us that he is the highest paid football coach in southern Illinois. Joshua Quick is the superintendent: