About a month ago I wrote this article about our legislators passing laws to legalize activity that had been going on in violation of the law.  As was pointed out in #3 of that article, a new bill has been drafted to allow for the delivery of wood chips to residents of the Township which can be viewed at this link.

This bill was generated because we found out wood chips were being delivered to some, but not others, and it was claimed to be political, as in, if you supported the right people, you got wood chips.  Although no one will admit to that accusation, we do know the activity of using public property for personal delivery’s stopped after we brought our Constitutional concerns to the table.  We had been told that multiple township attorneys confirmed the practice was, in fact, use of public property for private purposes, a violation of the Illinois Consitution.

Representative Peter Breen also confirms the practice of government or political graft is already illegal.  Which is why we got involved in the first place.  He states that he is all for uncovering and attacking government and political graft.  Can anyone explain why there has been no call for an investigation into his constituents who may have been involved in such graft?

Of particular interest in this bill is the Policy statement in support of it.

We see the claim in the policy statement that this new bill is salutary “as long as it is provided without prejudice or favor to any particular person or interest.”

So I guess by saying it’s OK as long as the practice is not abused somehow takes away from the fact it was that abuse that put us here in the first place?  My head is spinning!

Moving on up the policy statement, we thank Representative Breen for pointing out this illegal activity is a “long-standing tradition” in certain parts of the state.  We know it’s illegal because they’re trying to pass this bill to make that long-standing tradition legal. Are we allowed to ask why we are not enforcing the Official Misconduct statute that applies to public officials who violate the law?   Maybe we should just repeal the Official Misconduct statute since it appears to be a pattern that once a violation is identified they just change the law to un-rob the bank.

As far as this activity having a “minimal fiscal impact”, we challenge the Representative and those supporting this bill to present any evidence using township vehicles to deliver products to private residents will have minimal fiscal impact. To date, we have been unable to validate such a claim.

In our efforts of validating claims made during the last hearing, we filed a Freedom of Information Act request to the Representative’s Township for payments made to get rid of these chips because it was represented to the committee that “they have to pay to get rid of it”.

Show us the payment!

Our FOIA request is now past due for that evidence and we are getting zero answers from those supporting this bill as it relates to costs of hauling and dumping.  Never mind the fact the Township has now violated FOIA in what appears to be an effort of concealing the truth. You are free to infer as you wish as to why they refuse to provide this information.

The next issue is the claim that allowing the current illegal action to be legal will “reduce costs by eliminating the need to pay for the hauling and disposal of the products.”  Did you catch that?

We’re are going to “haul” wood chips to “dispose” of them at residents property, so by allowing that action, it reduces the cost of “hauling” and “disposing” of them at the dump? I may be missing something but the only savings is possible disposal fees as they are still spending money to haul it, just to a different location.

It’s a misrepresentation that this bill, to legalize what is currently illegal, is going to save money when they refuse to provide evidence of any expense incurred to date.

We offered a free disposal option but have not heard a word back on the proposed solution.

“Why not simply amend 415 ICLS 20/3 to include all units of government!  That SOLVES the problem and removes the question of private use of public property!”

(415 ILCS 20/3) (from Ch. 111 1/2, par. 7053)
Sec. 3. State agency materials recycling program.
(a) All State agencies and (units of government) responsible for the maintenance of public lands in the State shall, to the maximum extent feasible, use compost materials in all land maintenance activities which are to be paid with public funds.

Why is this the simple solution?  The very township performing this long-standing tradition acknowledges “Mulching around trees and bushes is an excellent landscaping tool. Nutrients are provided, soil stays moist longer, there is less lawn to mow, and mowers do not scar trunks and stems.” Changing one statute to include local government to do just as state agencies do is a simple fix. We believe a far better fix than opening up the pandora’s box of allowing 1432 Townships to start hauling to private residents.

Besides, why is Township Government wanting to compete with local landscape providers that are trying to create jobs by selling wood chips and mulch, along with delivery of those goods?

The policy states the bill is a “public benefit”.  Tell that to the businesses that sell wood chips!

In addition, how can they claim this new bill will have minimal fiscal costs when no one will produce any records?     Sure, people get free mulch, however, they already get that for free at the local wood chip pile as was insinuated in the committee hearing………or do they?  More on that below-LOL

And finally, we get to the confirmation that wood chips are a waste product.  Huh, is that not municipal waste under the EPA laws in this state? Wonder why we are passing this delivery bill when we already have laws that point to how this matter is to be addressed?

415 ILCS 15/2(a)(2) “that counties should have the primary responsibility to plan for the management of municipal waste“.  And what else does it outline should be happening, that clearly is not?

“(5) that solid waste planning should be encouraged to take place on a multi-county, regional basis and through inter-governmental cooperation agreements whereby various units of local government within a region determine the best methods and locations for disposal of solid waste.”

And to top it off, what was the purpose of that EPA statute?

(b) It is the purpose of this Act to provide incentives for decreased generation of municipal waste, to require certain counties to develop comprehensive waste management plans that place substantial emphasis on recycling and other alternatives to landfills, to encourage municipal recycling and source reduction, and to promote composting of yard waste.

Now that we have written a book, let’s get to some facts and logic.

The goal is to get rid of the chips and it was claimed that York Township has this big pile on the corner in town, that people can come and get them, but they’re not doing that.  Well, we drove to York Township (about 3 1/2 hrs from Edgar County) and took some pictures on a Saturday afternoon.  You know, Saturday, a day when most people are off work and able to do yard work.  Turns out, the pile of wood chips is behind a gated, locked, meshed covered fence with a sign that says “No Trespassing” – “Open Only to Walk Ins”, and if you want a truck or trailer load you have to call the township.  So the fact of the matter is you can’t just go get wood chips anytime you want as was implied during committee hearings in Springfield, which can be viewed below.

If a resident wanted wood chips, the first deterrent might be that NO TRESPASSING sign, or the locked gate.  Even if it was open, they only allow Walk-Ins.  Should they bring a bucket, wheel barrow, or garbage can to get these chips?  As far as the claim everyone knows they are there and they are free for the taking, may we suggest you remove at least part of the fabric mesh that blocks viewing through the fence?  Doing so might make people aware of what’s behind door #1.

The implication that they are out on the corner of a primary street and free for the taking is misleading at best. You can’t see them or get access to them without calling the Township.

We have also confirmed the claim the township has a newsletter that goes out on a regular basis is not true according to at least one trustee we spoke with today.  The inference that a newsletter goes out informing citizens about the wood chips was disproven with a single FOIA response for the newsletter, no such newsletter is sent regarding woodchips.

The truth of the matter is, they can’t get rid of chips because they are not allowed to burn them like every other township in the state, a problem of their own making with burn ordinances.  Couple that fact residents are not allowed to come and get them on their own schedule as was implied, we must question the real need for the passage of a law to legalize identified illegal activity. Far more questions need answered before we pass a new law.

I believe there are simpler solutions, not to mention we have much bigger problems in this state to fix than spending time legalizing actions being done in violation of law, but it appears that is the norm in DuPage County. Besides that, do we really need to change the law for 1,432 Townships in Illinois because a handful in DuPage County can’t figure out how to get rid of wood chips legally and cost effectively? 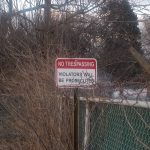 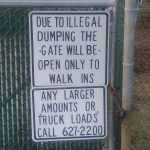 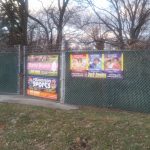 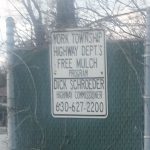