Lake Land College Blows $1,017,697.20 “Into the Wind”
.
Question:
What does an Illinois junior college do with industrial wind turbines which are 4 years old
(The answer may surprise you, but it does not surprise us.)
.
Answer:  The new wind turbines will be TORN DOWN!!!!
.
Yes, tonight, Lake Land College Board of Trustees are likely to vote to remove 2 wind turbines.  The cost for removal is $30,000.  One turbine will be removed entirely, and the second wind turbine will have its blades removed.  The remaining turbine tower and nacelle will be left standing, minus blades, for “education purposes.”  Perhaps it will be a reminder for the community, and the thousands of people who drive past on Interstate 57, that this was a monumental waste of taxpayers’ dollars.  The removal of the blades seems like a good plan because of ice throw hazards and severe damage or death caused in the event of a blade failure or detachment.
.
Link to the $987,697.20 Wind Turbine Waste article here:
https://edgarcountywatchdogs.com/2016/04/lake-land-colleges-987697-20-wind-turbine-waste/
.
So, Lake Land College has now wasted away $1,017,697.20 on wind turbines in just 4 years since they were installed.  The college will never, ever see one more dime of wind energy revenue out of these turbines.  The wind energy experiment in Mattoon Illinois is/was a giant flop.  Surely somebody should be fired for making the decision to allow money to be spent on installing these wind turbines.
.
To make matters worse, many wind energy companies are promoting 500′ tall turbines, which are well-known for causing sleep deprivation for nearby residents, and local government officials continue to allow this to happen to their neighbors throughout Illinois and Indiana and elsewhere.
.
The lesson here is this:  If a wind energy promoter comes to your school or college campus, be aware that in all likelihood, these machines will never, ever live up to the promises of paying for themselves.
.
The ECWD would like to commend the Lake Land Trustees for removing these turbines now.  Removing turbines will increase the health and safety of everyone within close proximity, including those who are travelling on nearby Interstate 57.
.
Attached image of the turbine near I-57: 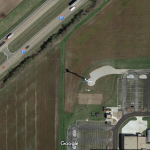