Traci Ellis became extremely defensive and confrontational during the meeting, without her name even being mentioned. She must be feeling a little guilty about what she said, knowing it was a lie and inappropriate. She was proud of it when she thought the board could keep anyone else from listening to it, now she is defensive and a victim. As a practicing attorney in the State of Illinois, she should know better than to accuse others of belonging to the 21st Century equivalent of the KKK. How can anyone support lies such as those?

Was that comment of hers the reason she worked so hard to keep the recording secret? We believe it was – and now she plays the victim card. 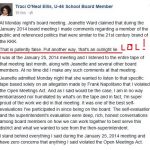 According to multiple sources, Traci Ellis lied on her Facebook post about what was on the tape. Those sources tell us that Traci O’Neal Ellis did say a member of the public belonged to the 21st Century equivalent of the KKK – Once again, we ask her to put that naked monkey on the table and demand the release of the recording.

At the closed meeting in question from 2014, Traci Ellis accused a member of the public to being a member of the 21st Century equivalent of the KKK, without that citizen having the ability to even know they were accused by this board member, nor the opportunity for rebuttal.

So after getting caught spewing racists statements about a member of the public, Ellis claims victim status – what a joke. She calls a former board member a liar, even though she was the one spewing those racists statements. She claims the Watchdogs were behind the attempt at listening to the tape – what she fails to realize is that we were definitely in favor of changing the law to specifically state ALL board members have the right to listen to ALL closed session recordings. We got involved only after learning the school board was overstepping their authority and refusing to allow access to those closed session recordings – and it does not matter which party or political leaning the board member had, it was our belief they had a right to the recordings.

If Ellis lies about what she said during a meeting, can she be trusted not to lie about everything else?

Traci O’Neal Ellis, “PUT YOUR NAKED MONKEY ON THE TABLE” or shut up and quit whining and lying about it.

We noticed Ellis didn’t dispute her quoted comments during her “I’m the victim” rant at the last meeting, instead, she tried pushing the subject to violation of the Open Meetings Act – which we believe should be turned over to the State’s Attorney for prosecution so he can petition the Court to release the tape, or that portion of the tape. She could always reduce legal expenses of the District by making a Motion to release that portion of the audio.

Watch the video from around 9:21 thru 21:10 to watch her defensive freak-show which includes further racist insinuations of “you and your cronies”, “you all love freedom of speech”, etc, etc… Who are the “you” she is talking about?