La Harpe, Illinois, City Councilman Kenny Foster issued a stunning rebuttal to our article claiming it was unpatriotic and un-American to post on Facebook a complaint wanting the town's torn and tattered flag replaced.

He claims there was no thank you after he replaced the flag - but who would thank someone after being called a "media whore" and told it was wrong to "post this shit" on Facebook? Additionally, why should he be thanked for doing his job? He should thank the residents for allowing him to serve as a councilman and for speaking out about the torn and tattered flag. Instead, you get what we wrote about yesterday, with a further scathing rant today.

Kenny Foster complained about when the picture was taken, the apology to those who served for the condition of the flag, and stated it was unpatriotic and un-American to talk about it on Facebook and he thought he was being used as a pawn for chaos. I think he created his own chaos thru his unprofessional and offending remarks to those who made the complaint.

Now he says he will not tolerate how they commented on the torn and tattered flag. Is he trying to stifle free speech, does he think he can tell people what they can and cannot post on social media? 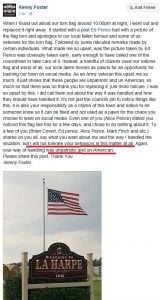 We believe that getting a torn and tattered flag replaced is one of the most patriotic and American things a citizen can do, along with free speech, which is what it was. The original post served its purpose and caused the flag to be replaced.

We think Mr. Foster should reevaluate how he approaches criticism by citizens, and should realize he has no choice but to "tolerate" their right to speech and petitioning their government.
.
Please consider a donation to the Edgar County Watchdogs.
[wp_eStore_donate id=1]
.