If you want to keep things simple and ensure personal agendas, politics, and ideology is not part of the equation when it comes to actions by our elected officials, stick to Dillon's Rule.  If we have said it once we have said it a thousand times, local government only has the power granted by law.  Anyone that does not understand what that means should do some research on Dillon's Rule.

The first question to ask before making any decision as an elected official is really very simple to understand.......or so we thought.

Where in the statute (state law) does it give us the power to make the policy we are making or take the action we are taking?

U46 School board created a policy designed to allow the majority in power to control access to certain records, closed session recordings in this case.  The policy they created is not supported by current law.   The past attempt by this board to destroy some of those records was met with a court ordered restraining order.  That was issued because the Plaintiff, in this case, Board Member Jeannette Ward, "has shown that there is a fair question that Plaintiff will succeed on the merits, to wit; in exercise of the right identified in A, a Board Member would then have a right to examine the record she is being asked to destroy."  (See court issued TRO here)

There is nothing in the current school code or open meetings act that grants a public body the power to create a policy that can control an elected officials access to public records pertaining to the public body they serve.  If they believe there is, we challenge them to put it in writing and provide the supporting case law and statute.  To date, they have been unable or unwilling to do so.

The actions by out of control U46 Board members and legal counsel is primarily the reason State Representative Ives drafted House Bill 4630 that specifically gives elected officials the authority to have unfettered access to closed session recordings.  That bill has passed out of both the House of Representatives and the Senate, unanimously in both chambers. We attended the hearings and during testimony the legislators were shocked that any public body would do what U46 has done, thus the unanimous support of the bill.  Thus the control freaks are on the wrong side of both logic and the law.

13E -Motion to allow Board Member Ward, and any other Board member, to listen to the closed session audio recording of January 25, 2014, pursuant to Board Policy #2.201 - Closed Session. The Board President shall designate a Board member to monitor the review of said audio recording at the District Office.

There is no provision in the law that gives the Board President power to designate a monitor over another elected official's review of a closed session recording, thus their policy exceeds their statutory authority, making it void.   We challenge them to prove us wrong!

In addition, their own policy that is unsupported by law, states,  "The Board shall designate the Board Secretary, Superintendent/Chief Executive Officer, or any other Board member to monitor such review".

It's clear by the wording on the agenda, this Board intends to violate their own policy by having the Board President designate who will monitor the board member wanting to listen to those recordings instead of the Board as outlined in the bogus policy.  So you see, they can't even follow their own policy.
We find it quite telling that the day before a status hearing on the Temporary Restraining Order they are taking steps to circumvent an elected official's rights to records, and doing so in violation of their own policy.
Although HB4630 has passed in the House and Senate, it has not been signed into law yet.  Once it is signed into law this Board and Board president should know they were not given the power to appoint a monitor, either in the old law or the new one.  Had the legislature wanted an elected official to be monitored they would have put that language in the bill. By sticking to the statutory construction of the law, all political posturing goes out the window as the law knows no party and the truth has no agenda.  Looking at the new law we believe the concerned U46 Board Members, who have gone to great lengths to suppress an elected official's rights, are concerned and they will take any step they can to manipulate the situation for their own gain or protectoin.
The law that is pending the Governor's signature is clear.
"allows access to the verbatim recordings and minutes of closed meetings to duly elected officials or appointed officials filling a vacancy of an elected office in a public body;"
Note it states, allows access to the verbatim recordings by elected officials, appointed officials filling a vacancy of an elected office.  To date, this board has not allowed access but once signed, we believe they will attempt to twist the second part of the new law as their means of controlling such access.
"provides that access shall be granted in the public body's main office or official storage location, in the presence of a records secretary, an administrative official of the public body, or any elected official of the public body".
In the presence of means only that one of the three or any combination of those listed, records secretary, administrative official, or any elected official of the public body, can be present.  It does not give them the ability to monitor the public official and rest assured, "monitor" is a word with meaning and we believe U46's is attempting to once again, control the process. It doesn't give them authority to "appoint" the person they want the board member to be in the presence of.
Considering the great lengths certain members of this public body have taken to suppress this particular record from Ms. Wards ears, one can only wonder how damning this recording is.  We suspect the actions taking during that closed meeting not only violated the Open Meetings Act but also were filled with political posturing and name calling of citizens not even elected to the board.
We challenge U46 to prove us wrong.  We challenge them to let the public hear the actions of their closed session so the public can learn what really took place in this meeting in question.  And lastly, we challenge their legal counsel to follow the law honestly and stop lying on matters of public interest.  That would start by resigning as the Clerk as he has no authority to be the clerk according to the statute.
For those who can attend, we encourage citizen participation at the June 6th, 2016 meeting of the U46 School Board meeting, with what they called business session starting at 7pm. 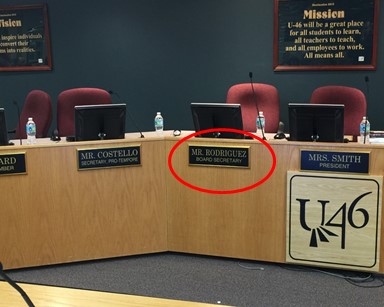