On 5/31/16, the Village of Tinley Park, through its attorneys at Kozacky Wentzel McGrath, filed a robust motion to dismiss all counts of what we argue is a SLAPP (Strategic Litigation Against Public Participation) lawsuit filed against the Village and several individual Board members by the Buckeye Community Hope Foundation (an Ohio-based developer whose business model is gobbling up lucrative tax credits by way of low-income housing projects). We have been covering this controversy since it broke in February 2016.

This motion to dismiss appears devastating, as it claims Buckeye's lawsuit to be poorly pled and without basis in law. It feels like a SLAPP (strategic litigation against public participation) because much of the 53-pages of the lawsuit Buckeye filed is focused on smearing the character of the residents of Tinley Park and discouraging participation by the public in criticism of their government. Buckeye aggressively played the race card and tried to bully Tinley Park with this lawsuit, when in fact the root of the controversy involves the simple fact that the tax-credit scheme Buckeye hoped to profit from did not meet the "street level commercial required" specification for the plot of land at 183rd & Oak Park Avenue (known locally as "Stuckly's Corner") where Buckeye has insisted on building housing that did not possess street level commercial space as required by the Legacy Code zoning ordinance.

Last month, the Village of Tinley Park admitted that its zoning code for the "Legacy District" (comprising Stuckly's Corner and the rest of the Oak Park Avenue corridor in downtown Tinley) has always required commercial development at street level. In late 2015, controversy was created when Village employees tampered with the zoning code improperly to remove the commercial requirement from the zoning. The Village has recognized that this tampering was void and that the zoning code has never provided for anything but street level commercial development being required on Oak Park Avenue. A lawsuit filed against the Village by citizens of Tinley Park alleged that Village employees tampered with the code to help Buckeye squeak their tax-credit scheme through, but that lawsuit was dismissed as judicially moot on 5/19/16 when the Village admitted that the zoning code was never legally changed by the employees and that the governing code for the Oak Park Avenue corridor has always been "street level commercial required." Thus, Buckeye has never submitted a proposal to the Planning Department in Tinley Park that adhered to the legal zoning code.

A key point in the motion to dismiss is the fact that the Village never denied Buckeye's project, as the proposal was sent back to the Planning Department for review once the controversy surrounding the zoning code tampering was brought to light in February. The Plan Commission was well within its legal rights to do that, as there were questions about the compliance of the project with the zoning code. Currently, Sheriff Tom Dart's office is investigating that code tampering to determine if any Village employees engaged in criminal wrongdoing in furtherance of Buckeye's interests with the tampering scheme. Because the Village never denied Buckeye's proposal, the recently filed motion to dismiss Buckeye's lawsuit against the Village concludes that Buckeye's case is not "ripe" and cannot be heard in federal court.

For Buckeye to be able to successfully sue the Village, it would first have to have a ripe injury to plead in federal court. Case law establishes that a developer cannot sue a municipality over a development project that has not actually been denied; federal law does not provide for suing over a hypothetical denial while a project is still being considered. In Buckeye's case, no final determination was made on the project and thus this matter is not ripe under the law.

Buckeye also attempted to bully the Village buy suing it under the federal Fair Housing Act, but Buckeye did not meet the requirements of establishing that any discrimination was engaged in related to a handicap or disability (which are requirements of being able to sue under the FHA). Buckeye's poorly-written pleading never once alleged the sort of discrimination that the FHA would preclude or provide remedy for.

Another wild and unsupported claim Buckeye made was suing for "breach of contract" and "tortious interference" related to Buckeye's attempted purchase of the land at Stuckly's Corner. That land is owned by a man named Greg Iser, who has a contract pending with Buckeye for sale of the land that Buckeye appears to have made contingent on approval of the tax-credit scheme it wants to engage in at the site. But, Buckeye's pleading never attempts to explain how the Village interfered with any such land sale and Buckeye never provided any substantive evidence to meet the requirements of bringing such complaints against the Village. The Village was never party to any real estate transactions and has no liability in any dealings between Buckeye and Iser.

Buckeye named the Village Board and Plan Commission as defendants when those two entities are not even legally allowed to be named as defendants, as they are neither individuals nor corporations and are sub-units of the Village itself. This is more evidence of how poorly-written Buckeye's pleading was.

Two Village trustees were also sued as individuals for being moderators of a Facebook page that Buckeye doesn't like. The law does not allow moderators of a social media page to be sued for anything third parties post or share on the page, according to the Communication Decency Act. A person can only be sued for what he or she individually publishes him or herself and cannot be responsible for anything third parties post. This part of the lawsuit had a strong SLAPP vibe to it because Buckeye appears to be trying to silence further criticism of its development (or similar developments) by intimidating the public into not speaking out and exercising their First Amendment rights (for fear of some entity like Buckeye later suing them over it).

Buckeye should be ashamed of itself for targeting specific individuals in the community for smearing and intimidation by name-dropping them in the lawsuit, for the apparent purpose of frightening them and chilling their protected activities in protesting the Village's actions in this controversy and petitioning elected officials for change and redress of grievances. Buckeye used the lawsuit to take punches at people on the ground in Tinley Park it doesn't like, which is an immature abuse of our court system to retaliate against leaders of a protest movement.

To gain attention for its lawsuit and solicit favorable media coverage, Buckeye seems to have ham-handedly played the worn-out race card by suing the Village under the Civil Rights Act of 1964. This was a disgusting and repulsive action taken by Buckeye that should be condemned loudly in all corners of the public square. It is repugnant for a developer such as Buckeye to claim that any opposition to its tax-credit scheme is racist and to attempt to smear the good people of Tinley Park as racists for protesting against an illegal zoning code change and other tampering done by Village employees that seemed to grease the wheels for a sketchy out of state developer. Any decent person must call Buckeye out for what it is: a shameless (and shameful) race-baiter, as race had nothing to do with this controversy. Sadly, there are still disreputable people in our world who believe that falsely accusing others of racism is the ticket to getting whatever they want in life. This must not stand. False accusations of racism should never be allowed to be used as weapons by a bully such as Buckeye.

As a matter of law, Buckeye is barred from making such racial accusations because as a corporation Buckeye has no race (and thus can't allege violations of the 1964 Civil Rights Act). Prudential limitation applies, meaning that Buckeye cannot sue over alleged discrimination against third parties, particularly when Buckeye never identified any third parties who were being discriminated against in this controversy involving the illegal tampering with a zoning code. Again, since Buckeye's project was never actually denied, Buckeye is able to show no injury to anyone, let alone third parties. And prudential limitation means that Buckeye cannot successfully sue the Village on the basis of hypothetical injury to third parties.

Buckeye filed a flashy, lengthy, 53-page public relations stunt which appeared less intended as a successful lawsuit and instead designed as a punch to the face of the people of Tinley Park. Like all SLAPPs, the Lawsuit didn't seem intended to succeed or survive a motion to dismiss but instead looks like a retaliatory punch meant to punish the citizens of Tinley Park for engaging in the political process and opposing Buckeye's tax-credit scheme and the tampering done to the zoning code by Village officials (who are both no longer working for the Village as a direct result of their roles in that tampering). Buckeye's suit contained vile smears against the character of a loving and welcoming community that, prior to the zoning code controversy, was best known for its generosity and citizenship in taking in refugees from Hurricane Katrina in 2005. As we all recall, Tinley Park led the way by opening its hearts, organizing convoys of relief supplies, and housing evacuees of Katrina. For Buckeye to now call this generous and caring community "racist" for the purposes of PR strategy and bullying to save its tax-credit scheme is insulting and disgusting. 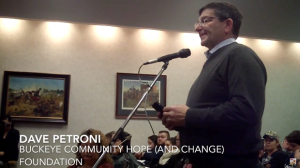