The people of Tinley Park were shocked and betrayed Friday night when a late-hour agenda-drop informed them that the Village’s Plan Commission was holding a meeting at the Odyssey Country Club on 6/16/16 to once again attempt to tamper with the Village’s existing Legacy Code zoning ordinance to remove the “street level commercial required” language that has been the subject of controversy since January. We’ve covered this story extensively, with the latest development being the Village acknowledging on May 17th that that Legacy Code was never properly changed by employees who had attempted to tamper with it in the past and that the “street level commercial required” mandate was always in effect (as a result of all attempted illegal tampering being void). 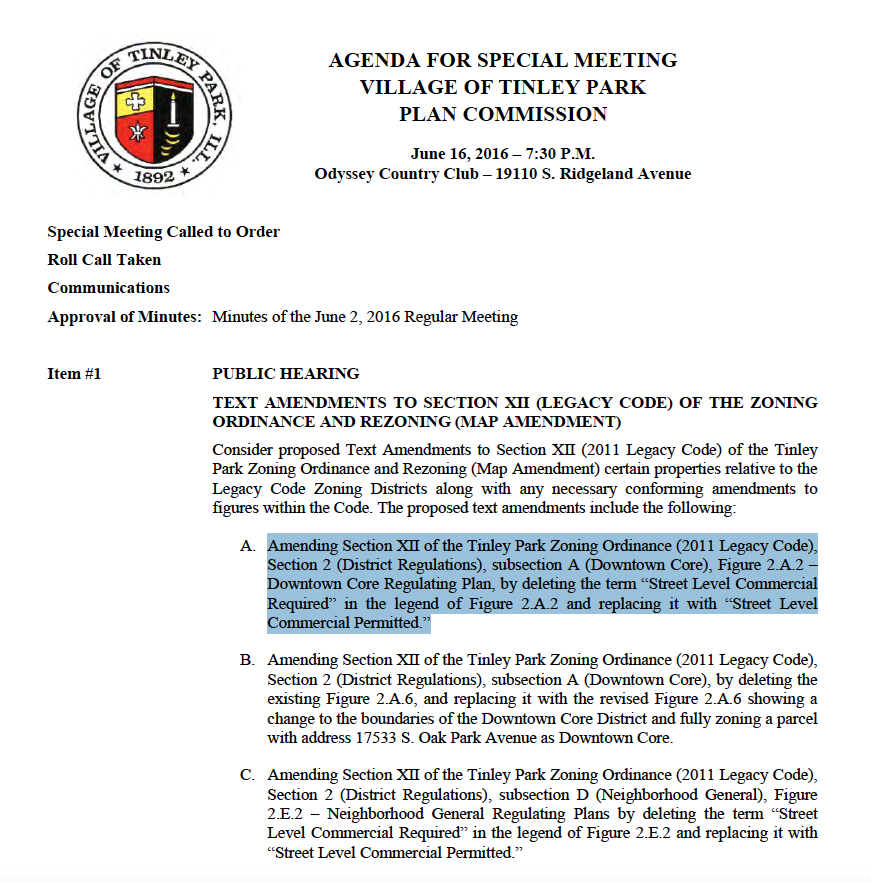 The purpose of the Legacy Code is to grow Tinley Park’s commercial tax revenue by requiring street level commercial space in all housing projects built in the city’s downtown Legacy District. This is meant to ensure that all new buildings have shops, restaurants, and other commercial endeavors on the ground floor and then apartments or condos above that. Tinley Park has a surfeit of residential development and a glut of empty condos and apartments plaguing the area but the village is in desperate need of commercial space to take some of the tax burdens off homeowners. The Legacy Code was written and enacted with community support as a means of strategically ensuring that downtown Tinley Park is grown with commercial businesses at street level and then people living in condos and apartments above that, so that no one can just dump a new inventory of apartments or condos into a market that is already oversaturated with apartments and condos (but is sorely lacking grocery stores, restaurants, cafes, and shops to attract tourists to downtown Tinley).

The Village interim Planning Director, Paula Wallrich, appears to have written the agenda for the 6/16/16 Plan Commission meeting that is being held at Odyssey Country Club. Wallrich became the interim Planning Director when Amy Connolly, the Village’s disgraced former Planning Director, resigned and left for Racine, Wisconsin in early May. Connolly, along with former Village Attorney Thomas Melody, were named as defendants in a lawsuit filed by citizens of Tinley Park which alleged that Connolly and Melody improperly tampered with the Legacy Code to create an opening for an out of state developer from Ohio (the Buckeye Community Hope Foundation) to build a project without street level commercial space as the Legacy Code requires. Citizens of Tinley Park hoped this matter was all resolved once the Village admitted last month that the tampering done by Connolly and Melody was void, but here Wallrich has resurrected this issue and is seemingly trying once again to tamper with the Legacy Code and create a new opening for entities like Buckeye to exploit.

Why are Village employees so hell-bent on eviscerating the Legacy Code by removing the “street level commercial required” language when that appears to be the only thing that will guarantee that Tinley Park grows its commercial tax base downtown? If commercial space is not required, then it appears that downtown Tinley will just be stuffed full of more apartments and condos in a village that is drowning in apartments and condos.

Wallrich, like her predecessor Connolly, appears to have an agenda that is not consistent with the wants and needs of the people of Tinley Park.

At the most recent Village Board Meeting on 6/7/16, Trustees Brian Maher and TJ Grady were incredibly rude to the public, acting as a tag-team and berating citizens who came to address the board. Maher and Grady are routinely up-front and transparent about their contempt for the public and how much they hate the fact that citizens now attend the board meetings and grill the trustees on what they are doing to the town. Grady has even been caught calling a member of the public a foul slur during the middle of a meeting. It’s clear Maher and Grady wants things to go back to how they used to be when the trustees could do as they pleased without the public paying attention to what they were up to.

Many suspect that Tinley Park’s Village trustees, particularly those like Maher and Grady who ran on the “Team Tinley” political slate with Mayor David Seaman in past elections, want to sell out the best interests of the town to enrich developers who do not want to provide what downtown Tinley Park really needs (but instead just want to make a quick buck off tax credit schemes to slap together ugly apartments or condos that there is no market demand for). It is a good question why trustees like Maher and Grady are so consistently hostile towards the public…and why Village employees like Wallrich are so obsessed with stripping the “street level commercial required” wording out of the Legacy Code.

Tinley Park is at a real crossroads. The “Team Tinley” trustees and Mayor Seaman regularly show a hostile contempt for the wants and needs of village taxpayers. They appear to see the citizens of Tinley Park as serfs, with Maher/Grady/Seaman as the masters and overlords who want to push aside the people and strip away the protections that prevent out of state developers from looting the village and destroying any chance for Tinley Park to grow its commercial tax base.

The people are demanding tax relief but the Village Board and Village Planning Department employees are completely deaf to the people’s concerns. It feels like a revolution is brewing, as Maher and Grady, in particular, keep stoking a powder keg every time they behave badly at board meetings, thumb their noses at the public, and insult the citizens who came before them to address and petition their elected officials and exercise their First Amendment rights.

Current Planning Commission Board Members are: