Bellwood Public Library Board Under Scrutiny for Closed Session Abuse –

The Bellwood Public Library Board held a bizarre meeting on 6/8/16 where the three board members in attendance — Regina Greene, J.B. Carr, and Mary Clements — refused to allow a fourth board member, Dorothy Clark-Smith, to telephone into the meeting. Under the Open Meetings Act (OMA), when a majority of a quorum of board members are present and speaking about board business, that is a public meeting. The OMA also provides for board members to telephone into a meeting and thus be in attendance telephonically if the missing board member is sick, is working, or has some other valid reason for not being in attendance, provided that the majority of the public body allows the member to attend by other means. In this case, they refused that option.

The Bellwood Public Library Board is an interesting case because the library itself is beloved and needed by the community and the staff at Bellwood take pride in treating the public well and providing valuable resources to them. Recently, however, Bellwood board members such as Regina Greene seem to have fallen under the influence of a mysterious older man who sits in the back of the room during the meetings and makes hand gestures at Greene, seemingly controlling her like she is his puppet.

At the 6/8/16 meeting, this Mystery Man (whom some have identified as a politically-connected man from Maywood who also interferes with the Bellwood School Board and seems to have control over board members there too) at one point made hand signals for Regina Greene and the two other board members to get up and meet him outside. Greene, Carr, and Clements did as the Mystery Man instructed and witnesses reported the three of them meeting with the Mystery Man on the sidewalk by the parking lot in the back of the library.

The four of them just got up, walked out of the meeting, and went outside to talk so that the public could not hear them. This, too, is the subject of a Request for Review because a majority of a quorum of board members meeting in secret — with a Mystery Man who controls them — so that the public cannot hear is a violation of the OMA. Greene, Carr, and Clements never returned to the board room and the meeting never resumed. They completely blew off the public once the Mystery Man summoned them to a secret meeting outside with him and they didn’t bother to ever come back. It was the most bizarre public meeting anyone in attendance had ever seen.

It appears that the board held all the deliberation for hiring this firm in closed session, without the public being able to see or hear what was going on and no other bids being taken other than just hiring this Stuttley Group. Compare this to how the Village of Tinley Park handled hiring new village attorneys back in March and April of this year, when deliberation and debate about which firms to hire was held during open session and the public was allowed to weigh-in on the prudence of hiring a very expensive firm. After the public objected, that expensive firm withdrew from consideration. The Bellwood Library Board angered the community by doing all of its deliberations about the Stuttley Group’s hiring in a closed session.

At the 5/11/16 Bellwood Public Library Board meeting, the Board was confronted on the shady handling of a bathroom remodeling project where it appeared that a consultant pushed forward by the Mystery Man who appears to control the Board was hired, also without any public deliberation or explanation for why an expensive consultant is needed to oversee a bathroom project. The community pushed back and demanded that the Board seek competitive bids from reputable companies for the construction projects. The Mystery Man signaled and pulled his strings and Regina Greene and the other Board members under his control appeared to do his bidding and insisted upon the “consultant” that the Mystery Man wants to be paid large sums for “consulting.”

The people of Bellwood are scared that this Mystery Man is engaging in a scheme involving kickbacks of some kind to plunder the Bellwood Public Library, using the board members he controls to achieve this. The Bellwood Public Library seems to have around $500,000 in cash reserves that it appears that the Mystery Man from Maywood may want to get his hands on bit by bit through “consulting” fees and no-bid contracts. The plotting and scheming to do this appear to be happening during the closed sessions that take place during the Bellwood Public Library Board meetings month after month, some of which last for over an hour. The public is not allowed to see or hear what is happening, but the Mystery Man is always lurking and may even be communicating with Regina Greene and other board members during those closed sessions.
.
Please consider a donation to the Edgar County Watchdogs.
[wp_eStore_donate id=1]
. 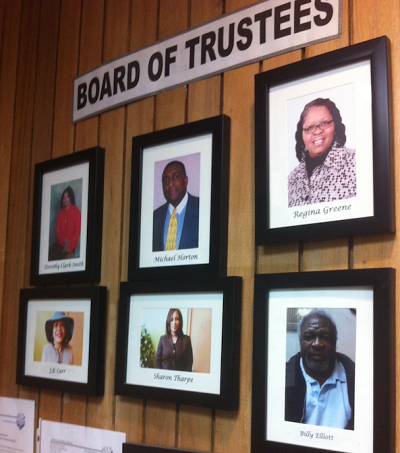