At Tuesday night’s Energy Facilities Siting Board Meeting (EFSB), with Invenergy‘s Director of Development John Niland in attendance, angry residents accused the company of running a deliberately deceptive ad in the Bargain Buyer regarding the timing and location of the meeting.

“Today, in every mailbox in Burrillville, The Bargain Buyer, which is our Bible in Burrillville, was delivered,” said Raymond Trinque, “Any clear thinking person would see this as a dirty trick by Invenergy.” The advertisement, (pictured) says the meeting will be held on Thursday night at the Burrillville High School.

The meeting was held Tuesday night at the Burrillville Middle School.

Social media contained reports from people who say that some residents arrived at the High School for the meeting only to go home. Residents worry that others may arrive on Thursday evening for a meeting that’s over.

– See more, including videos and the advertisement of meeting date, at: http://www.provgardener.com/news-item/invenergy-accused-running-misleading-ad-burrillville-bargain-buyer-0#sthash.6d7d63Yd.dpuf 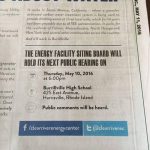