The Illinois Auditor General, the state's fiscal watchdog, is himself under federal investigation over campaign spending when he was a lawmaker.

Former Democratic state Rep. Frank Mautino became a legislator in 1991 to fill the vacancy created by the death of his father, Richard. In 2009, he became deputy majority leader under House Speaker Michael Madigan. He started his 10-year term as Illinois auditor general in January.

Among other things, a grand jury will look at his campaign spending of more than $200,000 on gas and repairs at one service station owned by a Spring Valley alderman, as well as $273,973 in payments to a local bank.

Kirk Allen and John Kraft, the two watchdogs who broke the story, joined "Chicago Tonight" to discuss their investigation. Mautino declined our invitation to appear on tonight's show. Because the investigation is ongoing, the charges against Mautino have not been proven.

So who are these Edgar County Watchdogs?

Continue reading and watch the video on WTTW: click here... 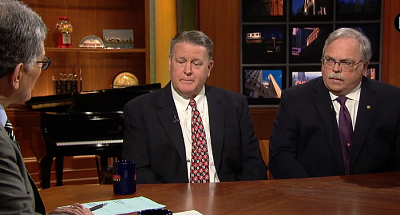