Last week, the Village of Tinley Park admitted that the tampering done to its Legacy Code zoning ordinance by former Planning Director Amy Connolly and former Village Attorney Thomas Melody (of Klein Thorpe Jenkins) was illegal and void. The Village Board voted on 5/17/16 to acknowledge that the tampering done to the zoning code from August to October 2015 did not meet the legal requirements for a proper change to the Legacy Code and, thus, the Village's zoning code was never properly changed.

In effect, the code as it existed on or before 10/04/15 (before any of the tampering was formalized) is the code that has been in existence this whole time...since the Village admitted at its last board meeting that illegal code changes must never be treated as if they even existed, since they were void due to proper procedures and mandates for legal code changes not being followed by Connolly and Melody when those two were pushing through the tampering.

On 5/19/16, Steve Eberhardt, the attorney representing citizens of Tinley Park who sued the Village in chancery court to have a judge recognize the code tampering as void, withdrew the citizens' lawsuit against the Village as moot.

Eberhardt and the citizens of Tinley Park prevailed as soon as the Village voted on 5/17/16 to admit and acknowledge that the Legacy Code zoning ordinance had never been changed (since the illegal tampering attempted was void).

This is a good opportunity to address why a lawsuit was necessary to force this admission by the Village and why the lawsuit appears to have been withdrawn after such an admission was made. The Village evidenced that it clearly always had the power to make this controversy go away, simply by taking a vote and admitting that Village employees and the Village attorney didn't follow the law when they tried to change the zoning code from "commercial required" to "commercial preferred" back in 2015. The lawsuit contended that the change to "commercial preferred" was meant to help one particular developer, the Buckeye Community Hope Foundation, push through a housing project that was based on a tax credit scheme that would not be able to secure funding without the "commercial required" wording removed from the zoning code. Many citizens of Tinley Park believe that Connolly and Melody tampered with the zoning code for the purpose of helping Buckeye push through its project and secure those tax credits. Currently, Sheriff Tom Dart's office is investigating the motivations and actions of everyone involved in the zoning code tampering back in 2015.

Connolly resigned as Planning Director earlier this month and now works for the city of Racine, Wisconsin. Melody was removed by the Village in April and Klein Thorpe Jenkins no longer serves as the Village's general counsel.

Once Melody and Klein Thorpe Jenkins were removed, the Village suddenly realized that it could resolve all this controversy by simply voting to acknowledge that the Legacy Code was never legally changed and that the old code is the only code that ever in fact legally existed. It is doubtful that the Village would have ever made this admission if it had not fired Melody and KTJ and obtained new legal counsel. The timing of the Village hiring new (and many would argue, better) attorneys and the Village admitting past mistakes cannot be coincidental, as Melody himself was named as a defendant in the citizens' lawsuit against the Village for his role in the 2015 zoning code tampering.

Suing a government entity such as the Village of Tinley Park is part of a citizen's First Amendment rights. Specifically, this is part of the Right to Petition the government for change and redress of grievances. Repeatedly in February and March 2016, the Village was confronted by citizens at board meetings who petitioned the board to address the controversy with the Legacy Code but the Village, seemingly on the advice of Melody and KTJ, did nothing to resolve matters and would not admit that the tampering to the Legacy Code was void. Citizens then asserted their Right to Petition by filing a lawsuit against the Village in chancery court to ask a Judge to compel the Village to admit that the zoning code had never been changed properly. If the Village had never been sued, then the Village likely would have never admitted that the zoning code tampering was void.

The lawsuit also had the positive effect of convincing the Village board to remove Klein Thorpe Jenkins as the Village attorney. Already, many positive results are being observed from the Village having new attorneys.

Eberhardt issued a press release shortly after the citizens' lawsuit was withdrawn, noting that once the Village admitted that the zoning code still contains the "street level commercial required" wording that was never properly removed because the tampering attempted was void, the Court would no longer even consider deciding the case because the Village had at that point removed all controversy. The Village admitted it was in the wrong and gave the citizens everything they wanted, so the lawsuit was rendered moot at that point.

The next court date for Buckeye's lawsuit against the Village appears to be in June. We will continue to follow this story as it develops.
.
Please consider a donation to the Edgar County Watchdogs.
[wp_eStore_donate id=1]
. 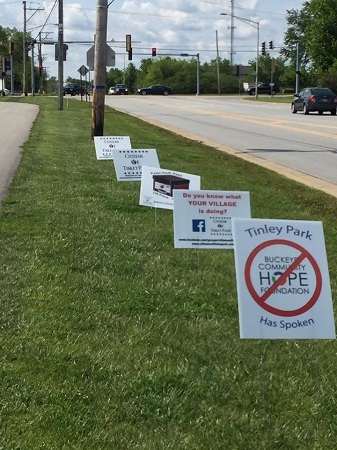