This is a huge defeat and total loss for Bittman which also contained a rebuke for the sloppiness of her complaint’s filing and a lack of any detail to support her wild allegations, despite the Court specifically asking Bittman to stop being vague and to supply such detail when she amended her complaint last year.

In March, Bittman withdrew her lawsuit against Megan Fox and Kevin DuJan, two investigative reporters who uncovered sex crimes and child pornography being accessed at the Orland Park Public Library, which was Bittman’s employer at the time. We believe that Bittman’s lawsuits against outspoken critics of the OPPL (who were also critics of policies pushed by the American Library Association that seem to encourage library staff members to look the other way and not call the police when crimes like child pornography access and masturbation are happening in the open in a public library) were designed to silence criticism of a suburban Chicago library that for years allowed sex crimes to continue there, with staff never handling these incidents properly. Bittman was caught live on the air by Dan Proft and Bruce Wolf of WLS lying about these sex crimes. They forced her to admit that child pornography had been accessed at the OPPL. Bittman never did another TV or radio interview after making that admission to Proft & Wolf.

Until July of 2015, Bittman was the public spokesman for the OPPL. She left that position shortly after being countersued for defamation by Megan Fox, one of the critics of the OPPL whom Bittman had lied about to news media in an effort to discredit her. Upon withdrawing her lawsuit against Fox in March of this year, Bittman finally admitted that she had not told the truth when she claimed to reporters that Fox did not have her youngsters with her in the Library. Claiming that Fox did not have her children with her appeared to be a strategy Bittman engaged in to make people think Fox was not telling the truth when she complained about a bad experience that she and her children had in the OPPL in October 2013…which ultimately led to Fox discovering that Library staff had for years been allowing men to sexually arouse themselves and even openly masturbate in the Library’s upstairs computer area without police being called. Fox used FOIA requests to uncover over 22 instances of the Library failing to call the police or handle situations properly, including one where a man admitted to Library Director Mary Weimar that he had viewed child pornography on one of the OPPL’s computers. Weimar and other OPPL staff chose not to call the police and the internal incident report documenting the child porn access was kept hidden until Fox uncovered it in FOIA production. Fox ultimately had to take the OPPL to chancery court to compel the Library to produce documents it had been hiding, including excessively redacted documents that covered up what had been going on in that building for years and years.

Megan Fox and Kevin DuJan have written a book called SHUT UP! The Bizarre War that One Public Library Waged Against the First Amendment. It is being published in late-May 2016 and chronicles every threat and act of intimidation made against Fox, DuJan, and others in the OPPL’s efforts to keep people from knowing what Library staff and board members had been doing for years. In addition to documenting the sex crimes that occurred in the OPPL (and the staff’s poor responses to them), Fox & DuJan also uncovered wasteful spending by the Library that included lavish meals and even gold jewelry being purchased for board members, in violation of the Local Library Act’s prohibition on board members receiving such compensation. The OPPL and its trustees wanted to shut Fox & DuJan up, and we believe that Bridget Bittman’s lawsuit against these critics was a part of that pattern of efforts.

Like everything else the OPPL did to try to scare people away, Bittman’s SLAPP intimidation failed miserably. Not only did she sue local critics of the OPPL’s dangerous policies to shut them up, but she also sued New Jersey resident Dan Kleinman of the Safe Libraries website. Kleinman is the nation’s leading expert on dangers to children in public libraries and has been covering instances of sex crimes occurring in places like the Orland Park Public Library for many years. Bittman appears to have believed that filing a meritless SLAPP lawsuit against watchdogs would frighten these critics away and cause everyone to be too afraid to continue looking into what has been going on at the OPPL (and what continues to go on at other libraries that adhere to the ALA’s diktat). Bittman was disastrously wrong in her calculations on that.

Judge Tharp’s ruling today has some interesting points that show how irresponsible it was for Bittman to have filed her suit against Kleinman:

* Bittman didn’t establish any connection between Kleinman and Illinois, except that Bittman herself lives in Illinois. Someone living in New Jersey and reporting on the bad things that happen at the Orland Park Public Library cannot be sued in Illinois for that reporting, considering that Kleinman has never set foot in the state of Illinois.

* Bittman tried to claim that a federal court in Illinois should have personal jurisdiction over Kleinman because Kleinman made FOIA requests of public bodies in Illinois. Judge Tharp rejected that argument, as someone making a FOIA request via email in another state does not mean that person is now subject to the jurisdiction of courts in that state.

* Bittman really doesn’t want anyone to ever watch her behavior caught on video on July 8th 2014 and posted to YouTube. Her lawsuit seemed to be about censoring this video and keeping people from seeing it or punishing people like Kleinman who drew attention to her horrible behavior in the video.

* Posting a hyperlink in a comment on an article does not constitute “publication” in the eyes of the court. Since Kleinman only posted a hyperlink to a video that Bittman hates, she could not get away with claiming he published the video…and so everything she argued based on the claim that Kleinman published anything collapsed after that.

* Bittman failed to even make clear what she claimed Kleinman did that made her believe she could sue him. Judge Tharp stated: “Bittman simply does not give sufficient detail about what Kleinman said, or where, or when, to assess the degree to which the alleged comments are suit-related.”

* Bittman looks incredibly foolish for wasting the court’s time and filing a federal lawsuit against someone without bothering to cite specific examples of anything the person did wrong. She also included broken links that the Judge noted were defective and links to other things that had nothing to do with her lawsuit. Judge Tharp seemed vexed by that time-wasting on Bittman’s part.

* The court instructed Bittman at one point in the past to be more specific and produce details backing up her allegations. She failed to do that and insisted on staying vague and nebulous, which did not work out well for her with Judge Tharp.

* Judge Tharp said: “Therefore, Bittman has not made a prima facie case that her defamation and false-light claims against Kleinman arise from conduct that he purposefully directed at the State of Illinois…Accordingly, the motion to dismiss is granted based on a lack of personal jurisdiction over Kleinman…Bittman will be given no further leave to re-plead against Kleinman. She made poor use of her last opportunity to supply crucial details about litigation-specific contacts between Kleinman and Illinois and brought almost nothing new to bear in her second brief on personal jurisdiction, instead largely copying her original arguments.”

In our opinion, what Bittman did was typical of SLAPPs…where the SLAPP filer (the SLAPPer) doesn’t expect the lawsuit to survive motions to dismiss and doesn’t intend for the lawsuit to be strong enough to make it to discovery. The act of suing and causing the person being sued to have to hire a lawyer and go to the trouble of defending himself is the whole point of a SLAPP.  This was an act of lawfare, which is abusing the legal system as a weapon against an opponent or perceived enemy.

SLAPPs are supposed to make people too afraid of being sued to speak out. People who file SLAPPs are bullies who want to silence and censor others, particularly those who are speaking out against a government entity engaged in wrongdoing.

Bridget Bittman appears to have thrown tens of thousands of dollars into a foolish and stubborn attempt to silence critics, including someone all the way in New Jersey. That blew up in her face in a big way.

She deserved this huge loss and hopefully it will be sobering to other public employees who for some reason believe they can get away with SLAPPing at and trying to frighten away watchdogs. 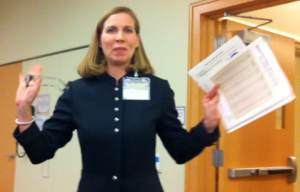