Explosive footage from last night's D142 elementary school board meeting shows Troy Agler, husband of board member Roxana Agler, launching into a deranged tirade that veered across all sorts of disturbing topics. This was a meeting attended by small children, where Agler chose to use extreme profanity and graphic sexual imagery. At no time did his wife, Roxana Agler, ever appear to try to stop him.

Watch the video (below) as Agler's behavior speaks for itself. In documents produced responsive to FOIA requests, Roxana Agler on several occasions made note of a friendship between Troy Agler and Deputy Police Chief Timothy Kristen in Oak Forest. Agler has repeatedly tried to throw her weight around as a school board member and encourage Kristen to target people that Agler placed in her crosshairs. Troy Agler, by acting the way that he did at this board meeting, has now made himself part of this story as well.

Parents were frightened by Troy Agler's behavior in public in the same way that parents reported being frightened by Roxana Agler's behavior ever since she became a board member in May of 2015. This was an elementary school board meeting and Troy Agler chose to behave himself worse than we have seen just about anyone ever behave at any public meeting. And again, this was in front of small children! 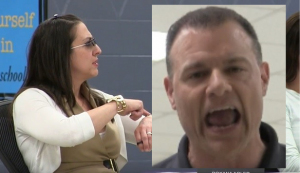