Marshall, Illinois Alderman Warren LeFever traveled to Springfield to give oral testimony at the Illinois House of Representative Judicial-Civil hearing this afternoon.

It was for HB4630, seeking to amend the Open Meetings Act with the language of:

Synopsis As Introduced
Amends the Open Meetings Act. Requires that any and all available minutes and verbatim recordings of meetings closed to the public prior to a newly elected official’s term in a public body shall be available to that official for review, regardless of whether those minutes or verbatim recordings are confidential. Effective immediately.

It passed in committee with a unanimous vote of 11-0.

Some Legislators questioned why this had to be amended and put into the OMA since it is already a right of a public official to listen to closed session recordings, regardless of when they were recorded. However, after hearing LeFever’s testimony it was evident that not all local public bodies conduct themselves as they should, and this bill is needed to codify the right of public officials and closed session minutes/recordings.

One committee member was shocked to learn that a public official would have to sue the public body to gain access to closed session recordings.

Let’s just say that the City of Marshall, and its Mayor, should have this bill named after them – “the Sanders amendment“…

We will post the audio of this hearing when it becomes available. 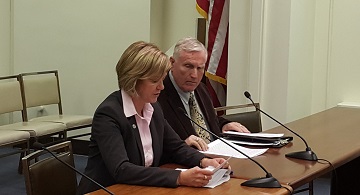