Roxana Agler, Forest Ridge Elementary School Board (D-142) member, is under increasing scrutiny for obscene and malicious emails she has been caught sending to other board members and Oak Forest, Illinois officials and employees. Agler is being accused of abusing her position on the school board to harass, threaten, and intimidate her perceived enemies. This includes making alleged false police reports against those enemies. One such report involved accusing a woman of talking to a dog. The principal target of Agler’s obsession and paranoia appears to be the neighborhood crossing guard, whom Agler seems to believe is the mastermind of some elaborate plot against her.

One of the emails Agler sent is especially concerning because it could in fact potentially rise to the level of felony intimidation, since it involves an elected official clearly attempting to use the power of her office to harm an employee of the city and fellow school board member, by asking the police to take negative action against that individual. In Illinois, intimidation is a Class 3 felony for which an offender may be sentenced to prison for a term of not less than 2 years and not more than 10 years.

(a) A Person commits intimidation when, with intent to cause another to perform or to omit the performance of any act, he or she communicates to another, directly or indirectly by any means, a threat to perform without lawful authority any of the following acts:

(6) Take action as a public official against anyone or anything, or withhold official action, or cause such action or withholding. 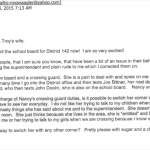 In a 5/28/15 email to Oak Forest Deputy Police Chief Timothy “Tim” Kristin, Roxana Agler announced that she was the new President of the District-142 school board (and also stated that she was Troy’s wife). It is unclear why the Deputy Police Chief would know or care who Troy Agler was or why being his wife mattered in this situation. After asserting her position as an elected official, Agler then detailed her personal animus towards Nancy Hullinger, a fellow board member who is also the neighborhood crossing guard. Agler appears to abuse her new position to communicate to Deputy Chief Kristin her desire to have the police reassign Hullinger’s duties.

Agler seems to tacitly acknowledge the impropriety of her email by asking Deputy Chief Kristin, “Is there any non-obvious way to switch (Hullinger) with any other corner?” Logic would dictate that a “non-obvious way” of doing anything would not be needed if the thing being done was fully above board (and could thus be obvious, instead of “non-obvious”). The email closes this act of intimidation with “pretty please with sugar and a cherry on top” as added incentive for Deputy Chief Kristin to do as the public official asked of him (with that all-important cherry on top).

It is unclear if putting “sugar and a cherry on top” are normally effective in convincing the Oak Forest Police to do an elected official’s bidding. 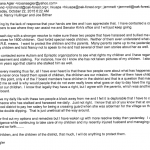 In a separate email, she claims to have contacted the Illinois Association of School Boards Executive Director, Roger Eddy, who we have “fond memories” of  here at the Edgar County Watchdogs website.

Her reason? Agler stated that she believed the crossing guard was jealous of her, “finds out where (she) is at,” and then texted her friends and neighbors Agler’s whereabouts. The emails from October made it clear that Agler continued going to the Oak Forest Police to make false police reports against the crossing guard, with the police declining to pursue Agler’s agenda against Hullinger.

Freelance reporter Megan Fox continues to comb through additional emails written by Roxana Agler that were produced pursuant to FOIA requests. Agler’s bizarre obsession with and vendetta against her neighborhood crossing guard is certainly a new low for an elected official in the Chicagoland area. 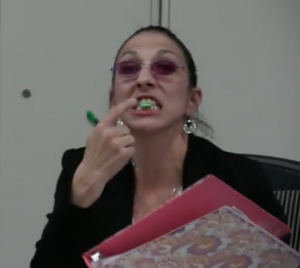