D-142 Forest Ridge School Board Member Roxana Agler’s email: “You stuck a rod up my a*s and I took it like a man” –

Roxana Agler (D-142 Forest Ridge Elementary School Board Member) is under fire for not only her bad behavior during board meetings and acts of intimidation she's accused of making over email, but also for perks she appears to be taking that are not afforded to other parents in the district. Emails produced under the Freedom of Information Act show that Agler has thrown her weight around as a school board member to score special treatment from Superintendent Paul McDermott and D-142 that other parents (who are not board members) do not receive. No elected official should be seen as above the law or deserving of special treatment because that person occupies a seat on a local board. This is not how our government is supposed to work in our state.

Parents of D-142 children have spotted Agler parking her car in no-parking and handicapped zones and now mockingly refer to those no-parking areas as "Special Board Member Parking." Agler was also caught in emails setting up special pick-up and drop-off times for her kids that are not available to other parents (page 7). Superintendent McDermott signed off on those demands for school board member Roxana Agler, while parents who are not members of the school board must adhere to strict pick-up and drop-off times, without exceptions.

The question is being asked: why should Roxana Agler be given special perks from D-142 just because she is on the board?

If Agler meets any resistance to her demands, she appears to have a track record of using her children as an ace that she theatrically plays to get her way. At the end of numerous emails, Agler tosses out the non-sequitur that she has one daughter with autism and another with epilepsy...which is hammered home as the ultimate trump (and as a kind of dare, as in..."Will you still say no to me after I have invoked Autism and Epilepsy as my ace in the hole?") (page 25 is a good example of this).

Other strange demands and declarations that Agler has made over the last year that turned up in various emails include:

Roxana Agler is easily the most crass and disturbing elected board member that we have encountered since observing Diane Jennings on the Orland Park Public Library Board through the years. Like Jennings, Agler chooses to use vulgar, toilet language when expressing herself, despite holding a public office. This is particularly shocking considering that Agler sits on a school board, whose members make an ethics pledge to abide by a code of conduct and decorum while on the board. Observers feel that since Agler's actions clearly violate that code of conduct that she should be forcibly removed from her board seat, as she has thus far refused to resign of her own volition.
.
Please consider a donation to the Edgar County Watchdogs.
[wp_eStore_donate id=1]
. 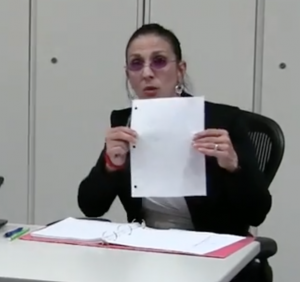