College of DuPage (COD) Trustee Diane McGuire appears to have had a Road to Damascus conversion to a watchdog.  I say appears as we are not yet convinced her conversion is truly a change of heart and mind.  We suspect, based on her ongoing attacks on the law firms representing the school, she is agenda driven to embarrass those firms instead of actually protecting the taxpayers.

During the April 7, 2016, Trustee meeting, McGuire claimed ignorance on a legal firm bill presented for payment.  We initially covered that meeting in this video article.

We finally received our Freedom of Information documents from COD regarding the law firm in question.  Just as expected, both McGuire and Erin Birt were asleep at the wheel during their short reign of terror on the taxpayers of District 502.  Had McGuire been paying attention back then like she is now, maybe the drama she created during that meeting could have been avoided.  Now don't get me wrong, I appreciate Trustees actually paying attention to the details like she is currently doing, however, her actions appear to be more about gotcha politics than actually doing what is right for the taxpayers.

The very law firm that McGuire and Birt claimed ignorance on was actually hired, we argue illegally, by the General Manager of the WDCB Radio station owned by COD and all done under the leadership of former Chairman Erin Birt.   We can only wonder how both of them failed to notice the legal bills back then considering they seem to have such a sharp eye for them now?

Not surprisingly, the past board never approved the hiring of this law firm and they don't even have an engagement letter with the firm.   The bills were pushed through in the IMPRESS accounting system, meaning they were never viewed by the board in the past, an issue former Chairman Hamilton fought hard to fix.   We are glad to see they are looking at them now but can only wonder when these two will admit they were asleep at the wheel and failed the public.

The first bill from the law firm was in January 2015, and as you can see on the billing, they were addressed to Dan Bindert, GM WDCB - College of DuPage.   Both Birt and McGuire appear to understand it's the Board that hires legal counsel and approves such hiring, yet while they were in charge they ignored the proper process.  The argument that they did not know he was hired only holds water to the point of the first bill being presented for payment, which they clearly failed to notice as is evident from their silence when those bills were paid.

Below are the billings received from COD and as you can see, Birt and McGuire should have to explain how this happen under their watch? 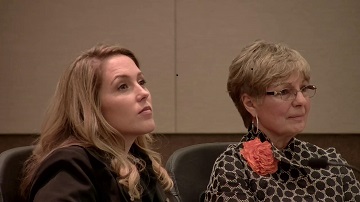