On 4/4/16, the Attorney General’s Office informed the Village of Tinley Park and its attorney Thomas Melody of the determination that the Open Meetings Act was violated at the February 4th, 2016 Planning Commission meeting, since the Village did not take reasonable measures to ensure that the meeting was held in a location that is convenient and open to the public. The AG’s Office also determined that the Village of Tinley Park violated the OMA by not having proper rules protecting public comment at its public meetings.

On 2/4/16, the Village of Tinley Park held a Planning Commission meeting in its cramped Council Chambers room, despite the 2/2/16 Village Board Meeting held in that same room being unable to accommodate everyone who wished to participate in the meeting. At both the 2/2/16 Village Board Meeting and the 2/4/16 Planning Commission meetings, the controversial Buckeye Community Hope Foundation “Reserve” project was being discussed; this is the low-income housing project that did not meet zoning codes requiring commercial development in Tinley Park’s Oak Park Avenue corridor until the Legacy Code zoning ordinance was allegedly tampered with illegally to remove wording that blocked the “Reserve” project from being built. A lawsuit filed in Cook County Circuit Court on 3/22/16 alleges that Planning Director Amy Connolly and Village Attorney Thomas Melody intentionally tampered with the zoning code to specifically benefit Buckeye. We have been covering this scandal regarding the zoning code tampering since the beginning.

According to the Attorney General’s determination on 4/4/16, the Village of Tinley Park should reasonably have foreseen that the cramped Council Chambers would not have been able to hold all of the people who wanted to make their voices heard and address the Board in protest on 2/4/16. The Open Meetings Act requires that if a public body knows that a large number of people want to come to a public meeting and participate that the meeting space used must be able to accommodate them comfortably. Since the 2/2/16 Village Board meetings was attended by over 1,000 people and those wishing to speak were forced to stand out in a hallway where they could not see or hear the meeting, the Village should have rescheduled the 2/4/16 if it would not able to find a more open and convenient location for that meeting. Since the Village chose not to find a new meeting location to better accommodate the public and held the 2/4/16 Planning Commission in the cramped Council Chambers anyway, the Village violated the Open Meetings Act.

A similar inquiry has been opened by the Attorney General into the 2/16/16 Village Board Meeting, which was also held in the same cramped Council Chambers. At that meeting on February 16th, once again the room was filled to capacity and hundreds of people were shunted off to an overflow room, where they could not properly see or hear what was happening in the Council Chambers. Additionally, anyone wishing to speak had to line up in a hallway outside the Council Chambers, where they were provided with no access to sound or video of the meeting. The OMA does not allow for any of this, particularly after the Village saw on 2/2/16 that it could no longer accommodate the public in the Council Chambers due to the public outrage over the Legacy Code zoning ordinance tampering scandal.

Another inquiry is being made into the 3/22/16 Village Board meeting, which was held at Andrew High School, because in the middle of public comment at that meeting the Mayor announced that public comment had to end before everyone had a chance to address the board because the high school wanted to close for the night. So everyone had to go home abruptly. The meeting agenda for 3/22/16 did not state an end time for the meeting and the Village had an obligation to allow the public to address the Board. Suddenly declaring that the building needed to close because the high school staff wanted to go home for the night is not a reasonable excuse to abruptly end public comment and deny people their right to address a public body under the OMA.

Alleged violations of the OMA that occurred at the 2/16/16 and 3/22/16 Tinley Park Village Board Meetings are awaiting final determinations from the Attorney General. The determination handed down on 4/4/16 regarding violations at the 2/4/16 meeting seem to indicate that the AG’s Office will not look favorably on the Village’s actions on 2/16/16 and 3/22/16, however. 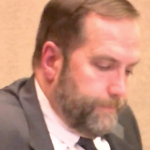