We have an update on a bizarre story out of Tinley Park, Illinois (a suburb of Chicago) where Christy Heins — the woman caught on video harassing a reporter and trying to stop her from filming interviews in a public building — has been busted lying to the police.

Documents obtained via the Freedom of Information Act show that on 2/17/16, Heins lied to Tinley Park Police Detective Jose Vega about her strange actions on 2/16/16. This seems to be a typical tactic of those wishing to keep Truth hidden, file false police reports against reporters and citizens, similar to how the Orland Park Public Library acted a couple years ago.

After video footage of Heins harassing freelance reporter Megan Fox hit YouTube, it quickly racked up thousands of hits online as people were shocked by Heins’ bizarre behavior in public and her misinformed belief that she could prevent a reporter from filming interviews in a public building after a public board meeting. It should be obvious that no one has any such legal right to interfere with a news reporter’s personal liberty to cover stories she chooses and to film interviews as she desires in a public place. The freedom of the press is paramount in our country in order for the people to have a true right to petition our government for change and redress of grievances.

The Open Meetings Act guarantees the right for anyone at all to film during an open public meeting so that these proceedings forever remain transparent and subject to the public’s supervision and oversight. The United States Constitution and Bill of Rights guarantee the First Amendment Freedom of Speech for all citizens to film video in public places, such as the hallway outside a public meeting room in a public building in Tinley Park where a crowd of meeting attendees had gathered to discuss the events of the meeting and speak to reporters such as Fox. Illinois does not give anyone the right to demand to see a reporter’s press credentials.

The morning after the YouTube video of Christy Heins’ harassing actions was posted, she appears to have foolishly retaliated against Fox by making false claims to the Tinley Park Police Department. These included Heins telling the clear and obvious lie that Fox had become “irate” when Heins demanded Fox’s press credentials and tried to stop Fox from conducting interviews in the hallway after an open public meeting at Village Hall. The video below clearly shows that Heins’ statements to the police on 2/17/16 were false, since at no time did Fox become “irate” in the slightest:

As you can see for yourselves in the video, it was clearly Heins who was irate and disorderly.

Fox remained calm and professional at all times while Heins aggressively waved her hands, demanded that the camera be pointed at her, made strange faces and blew kisses at the camera, and at one point wildly clawed and scratched through her own hair while glaring at the camera with a vacant look in her eyes.

Heins’ false statements to Detective Vega are not supported by what was recorded in the video. You can compare/contrast what really happened to what Heins falsely recounted to Vega, as noted in his report from 2/17/16. 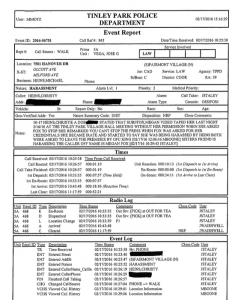 After speaking with Megan Fox about the harassment she had received from Christy Heins and watching the video that Fox filmed and posted to YouTube, Detective Vega wrote a report supporting the fact that Fox was the victim of harassment (listed as the offense of disorderly conduct at the top of the report) on 2/16/16 and that Heins was the aggressor who directed the harassment at Fox.

Detective Vega, the Reporting Officer (R/O) in the report, notes that: “R/O viewed the video and observed that Heins was the aggressor during the incident and was not being recorded prior to approaching Fox.” Detective Vega then provided a link to the YouTube video above. 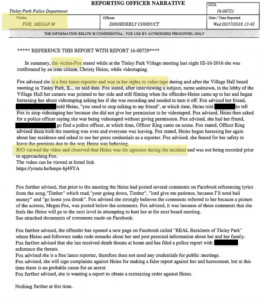 According to the report, Fox informed Vega that she felt threatened by Heins and sought a restraining order against Heins because Fox feared that Heins would escalate her harassment at future board meetings. Both the Tinley Park Police and the Cook County Sheriff’s office have already cautioned Heins to not harass Fox further.

Fox has been filming a popular documentary series on the ongoing public corruption scandal in Tinley Park, where a zoning code appears to have been changed improperly to allow a developer from Ohio with a checkered past to slip a low income housing project into Tinley Park’s downtown “Legacy District” without the Village Board’s consent or approval. Full coverage of this scandal can be found here.

Heins identifies herself as the “Co-Adminstrator” of a closed and “secret” Facebook group called “Real Residents of Tinley Park,” which counts former Tinley Park Mayor Ed Zabrocki as one of its members. There is increasing suspicion and speculation amongst those following this story closely in Tinley Park that efforts such as Heins’ to intimidate and bully Fox and harass her away from this story are strategic in nature, since Village employees and holdovers from the old Zabrocki administration do not want full scrutiny of whatever happened behind the scenes that mysteriously allowed a $16million low income housing project with tax credits from IHDA to sail through without Village Trustees or the public knowing much about it.

Fox has been the only reporter consistently covering this story on an ongoing and in-depth basis, particularly the corruption angle as it applies to suspected and potential wrongdoing by Village employees in the Planning Department that appear to have been working in concert with the Ohio-based developer. Emails and other documents produced pursuant to FOIA requests thus far have been enough for the Village to call for an investigation by Sheriff Tom Dart’s office. That investigation is supposed to officially launch in a few weeks.

We will update as this story develops further.
.
Please consider a donation to the Edgar County Watchdogs.
[wp_eStore_donate id=1]
.